Recently, I had the opportunity to interview rising-star, horror/thriller author, Hunter Shea. The event took place as part of his virtual book tour for his based-on-true ghost story, The Waiting. The segment of our conversation which focused on that story can be found in the post:

Interview with Hunter Shea: on THE WAITING and the true-life ghost-story that inspired the novella.

In our nearly two-hour long chat, however, we talked about a lot more than The Waiting. In the following five-minute portion of our conversation, we discuss:

As both a fan and a writer of horror, I learned a great deal from the time I spent with Hunter … perhaps most importantly, I came away knowing that it’s crucial to persevere.

I found this pic while searching for images of Hunter Shea with which I could illustrate the video. We never discussed this tattoo, and I don’t think he even knows I have access to the photo. See what an efficient stalker I am? (*See note below.)

*(This is the “note below.”)  Read: Am I a good social media user, or a creepy stalker?

Thank God I love the kind of work I do, because – lately – there’s been plenty of  it!

I’ve returned to working full-time at the #paranormalhotel – at least for the next few weeks. (A staff member has had a family emergency.) I’d always hoped I’d be able to go back part-time this summer, but I wasn’t expecting this. Because I recently trained Langston for the job, I was almost completely up to speed when I was called back, but there was some adjustment required.

Otherwise, most everything is the same.

When I found out I’d be going back to the hotel, I feared I’d fail to meet my Camp NaNoWriMo goals, so I took a deep breath and plunged in. I’m not at goal yet, but I’ve managed to get an awful lot done and I think I’ll make it. I haven’t been taking the time to properly track anything (or participate in the camp festivities) but I just did a quick tally of hours spent story mapping and drafted words and come up with 23,137. Tell me that’s still within reach!

Just five minutes ago, I finished reading Hunter Shea’s new novella, The Waiting. This is a good thing, because – in about an hour – I’ll be settling in with him on Skype, to do the first official interview ever for The Paranormalist.

In a way, I’m glad I had to hustle up and get the reading done in one sitting, right before the interview. The details of the story will be fresh when I ask him all the questions I have roiling around in my brain. My plan is to have at least one segment of that interview packaged and available for viewing here tomorrow. Right now I can tell you it’s a fast, tight, eerie read which still manages to be emotionally affecting.

By the way, I want to thank you all for making the book giveaway I recently sponsored a great success. The winners have all been notified, and – as far as I know – the books are winging their way to their new owners.

Earlier this week, as we were arranging our interview time, I asked Hunter to decide what we’d be drinking tonight. Now, I have to run over to the liquor store to see if I can find any Captain Lawrence pale ale. As a cheap-American-beer-drinker, I’m glad he didn’t suggest Guinness.

Click here to get your copy. You still have time to read it before the interview series begins.

The wisdom of Stephen King: best quotes from Constant Writer.

For this week’s King’s March, I decided to share my favorite quotes from my favorite author. As long as I was at it, I turned some of them into a sort of quiz. I also created a list at a site where your can up-vote your favorite or add one that I missed. You’ll find all that below. Before we go there, though, I want to do a quick update on my experiment with this linky / bloghop. 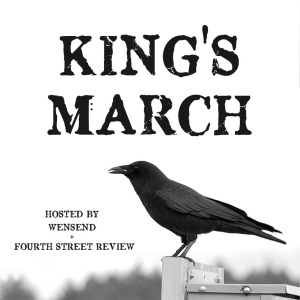 For those of you following along, this post is part of an experiment intended to help me learn about and understand blog hops, aka linkies. I revealed my confusion about the practice in the first post in the series. Now I’m starting to get it … and I am pleased. If you have a look at the comments thread on my second King-themed post, you’ll see that the hosts of this King’s March linky are keeping track of the participants’ entries on their blogs. (In the comments to my post there are two “pingback” notifications, which lead back to where they’ve mentioned my blog, as well as those of the other participants.)

The way it’s done – or at least the way these two bloggers do it – is to create a weekly post which summarizes the blogs created in honor of the linky in the previous week. They also put up a new linky widget where participants can add another link, to another post. That’s the best way for non-participants to gain easy access to all the themed posts … go to the scheduled update post at the host blog or blogs, and browse the links and / or take a peek at the linky itself to see what’s going up throughout the week. In this case, the update post goes up on Saturdays. (It’s not very different from my #NetNet posts, now that I think about it.)

Here are the links to last Saturday’s summary posts at Forth Street Review and at Wensend. If you go there, you’ll see the link to my post from last week among the others. If you click the “Mister Linky You’re Next” icon, you’ll see a list of what’s going up this week, including this post.

BACK TO STEPHEN KING

I’m obsessed with my fiction writing lately, and I’m STILL working on Christine. I wanted to contribute something fun to the hop this week though, so I’ve spent some hours hunting down my favorite Stephen King quotes. I’m cool with the time investment, because *I* am his number one fan.

Can you place the quote in the right book?
(Highlight the space between the parentheses to check your answers.)

2. “The soil of a man’s heart is stonier; a man grows what he can and tends it.”
(Pet Sematary)

3. “Get busy living or get busy dying…..there ain’t nothing in between.”
(Different Seasons)

4. “It’s a Dance. And sometimes they turn the lights off in this ballroom.
But we’ll dance anyway, you and I. Even in the Dark. Especially in the Dark.
May I have the pleasure?”
(Danse Macabre)

6. “Anything with the power to make you laugh over thirty years later isn’t a waste of time. I think something like that is very close to immortality.”
(Hearts in Atlantis)

8. “Calling it a simple schoolgirl crush was like saying a Rolls-Royce was a vehicle with four wheels, something like a hay-wagon. She did not giggle wildly and blush when she saw him, nor did she chalk his name on trees or write it on the walls of the Kissing Bridge. She simply lived with his face in her heart all the time, a kind of sweet, hurtful ache. She would have died for him.”
(It              )

9. “Sometimes being a bitch is all a woman’s got to hold on to.”
(Dolores Claiborne)

10. “The thing under my bed waiting to grab my ankle isn’t real. I know that, and I also know that if I’m careful to keep my foot under the covers, it will never be able to grab my ankle.”
(Night Shift)

11. “God grant me the serenity to accept what I cannot change, the tenacity to change what I may, and the good luck not to fuck up too often.”
(‘Salem’s Lot)

13. “The place where you made your stand never mattered. Only that you were there… and still on your feet.”
(The Stand)

14. “In small towns people scent the wind with noses of uncommon keenness.”
(The Stand)

15. “God is cruel. Sometimes he makes you live.”
(Desperation)

HOW MANY DID YOU GET RIGHT?

Sometimes, I think I over-identify with King. Maybe we all do, and maybe that’s what makes him such a devastatingly effective author. It’s like he just “gets it” in a way that many others don’t.

I’m bipolar, so these resonate:

“I think that we’re all mentally ill. Those of us outside the asylums only hide it a little better – and maybe not all that much better after all.”

“There’s no bitch on earth like a mother frightened for her kids.”

“When his life was ruined, his family killed, his farm destroyed, Job knelt down on the ground and yelled up to the heavens, ‘Why god? Why me?’ and the thundering voice of God answered, ‘There’s just something about you that pisses me off.”

“Monsters are real, and ghosts are real too. They live inside us, and sometimes, they win.”

I’m a horror writer, so these resonate:

“Fiction is the truth inside the lie.”

“I’ve said it before, and I’ll say it again. When you find something at which you have talent, you do that thing (what ever it is) until your fingers bleed or your eyes pop out of your head.”

“I never saw any of my dad’s stories. My mother said he had piles and piles of manuscripts.”

So, what are your favorites?

Some of you may remember my Ranker list, Classic Trick or Treat Loot. Creating that and watching it take off as people shared their opinions was fun. I wanted to do the same thing with these Stephen King quotes, but it turns out Ranker makes terrible quote lists … ugly, just ugly. I found another ranking site called The Top Tens, which does a better job of displaying sentences in a pleasing way. Pop over and check it out. You can up-vote your favorite quote, add one I forgot, or even re-rank the whole set in a list of your own.