The polar vortices, repeatedly roaring down from the arctic, seem to be keeping us huddled under blankets on our sofas. Here at The Paranormalist, there’s been an uptick of hits on posts offering entertainment ideas for paranormal-type folks who can’t get outside to cryptid-hunt, UFO-watch, or graveyard-prowl.

Yesterday, I gave you the rundown on what’s happening on TV right now, and in coming weeks. Today, let me offer a few more suggestions.

The most popular post at the blog is: The 13 most haunting films, for ghost story lovers (and another 13+ worth watching.)  I’m not surprised – it is a treasure trove of  creepy ghost movies recommendations, thanks in large part to the fantastic comment thread, where folks have been chiming in with suggestions of their own.

If ghost stories aren’t the ideal movie entertainment for you, just pop over to the Courting Creepy section to find suggestions for scarier fare – films featuring writers or zombies. You can also shore up your knowledge of classic horror flicks or risk intensifying your cabin fever into full-blown insanity by exploring a selection of the best psychological horror films.

DO SOMETHING A BIT MORE ACTIVE:

If you’ve reached the point where you need to DO something other than sit passively on the couch, I’ve got a few options for you.

If you have access to a treadmill or indoor running track, check out Zombies, Run! a fitness app with a dark twist.

If all you’ve got is a cell phone (and a bored friend or two who also have cells,) look into the sci-fi techno-babble game Spaceteam.

If you want to have something to show for your isolation, review Halloween hobbies: monster models, knitting, cross stitch, paper cutting and more. Despite the Halloween-theme of the original post, there’s plenty of ideas there that can amuse a winter-trapped horror / paranormal fan.

One of my best friends is studying to become a yoga instructor. Another regularly goes on 8 mile+ bike rides. My son is a black belt. FIVE of my closest family members completed The Warrior Dash this summer.

Some of my nieces, my husband and my son. Aren’t they magnificently filthy?

Me? I take pictures. 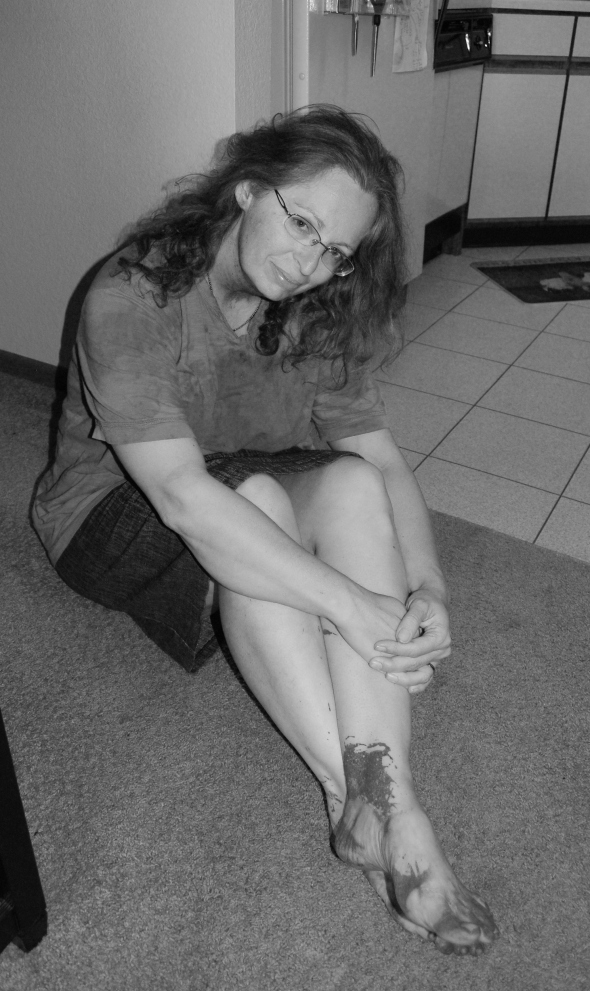 The only reason I have mud on me is that I waded into the sloppy mess at the finish line to give hugs. Completely ruined my shoes.

I am not a sporty person. Which is a shame, I guess, because – apparently – I have pretty good genes. (I come from Norwegian and German farmer stock.) Despite 40+ years of an utterly ridiculous diet, and an almost complete lack of exercise, my body hasn’t given up on me yet. Every once in a while, I realize I’m feeling sore and tired, so I commit to doing a few sun salutations daily. (This “commitment” usually lasts a week or two.) On the first day, I am always shocked at how stiff and weak I’ve become. Then, the next day, I can effortlessly drop into a pretty darn good standing forward fold, and I can hold a plank for minutes at a time. (Though that is harder, now that my future-yoga-instructor friend told me I needed to drop my hips lower.) Just since I started working at the hotel, my biceps have firmed – even started to pop – thanks to all the sheet folding I have done. My body wants to be healthy.

The problem is that I find exercise boring. It’s also hot and sweaty and just plain not fun. (My experience leads me to believe that endorphins are a myth.) It doesn’t help that I hate competing against others, which leaves me out of actual sports. In my lifetime, I’ve found only a handful of (G-rated) physical activities I actually enjoy. On the exotic side, I like yoga, kayaking and rock climbing. (Before you get any ideas about the strenuous nature of those activities, you should know I mean the least dangerous version of them. Think paddling a kayak around the edge of a lake, or scrambling up and down the gentle bluffs near the St. Croix River.)

I also like to walk/hike and, strangely enough, run. (I don’t mean jogging. I mean all-out running –  across a pasture, along a soft-sand road, down a sun-warmed sidewalk. And, yes, I’d prefer to do it barefoot.)

I don’t run as much as I used to. When I forget myself – like when I’m playing with the dog – I find that my form is still good but my endurance is … not. (Don’t ever start smoking, Children.) Still, until my lungs catch fire and my heart threatens to explode, it feels awesome.

Which is why I am now absolutely determined to get a smart phone – just so I can buy an $8 app:

This is my favorite review of the game:
http://www.boston.com/community/blogs/joyschtick/2012/04/zombies_run_review.html

By the way, now is your chance to weigh in on the IPhone v. Android debate. Has anyone actually tried the game? Or, like me, do you now think you want to?