Tonight, as promised, I bring you a new Courting Creepy list. As soon as I agreed to participate in the recent Blogger Virtual Zombie Walk, I knew I needed to craft a zombie movie list, so I’ve been thinking about it since late September. I racked my memories. I watched new-to-me films … which I didn’t much like. In the end, I was able to come up with only nine solid recommendations. That’s a shame, because I genuinely respect the genre. Some of the best horror movies I know are zombie films. (But then, so are some of the worst.) Eventually, I had to admit that most zombie films are just a bit too bloody and violent for me. In desperation, I reached out to my daughter’s beau who has a particular affection for zombies. He agreed to write up a list, using my existing lists as an example of format.

Russian Vodka by terrin in Virginia

The Beau’s take on zombie movies:

If horror movies were liquor, then zombie movies would be vodka. You can add just about anything to vodka and get a palatable drink. The same can be said for zombie movies. Granted, you have your top-shelf zombie movies and your cheap b-list zombie movies. Beyond that, you have your flavors: zombie comedies, zombie action flicks, zombie science fiction … the variety is overwhelming, but all of it works in some way. It’s the various permutations of these films that ensure you are going to like some kind of zombie movie, you’ve just got to find the right variety.

Let’s start by talking about pure zombies. This includes George Romero’s “of the Dead” series, most of the remakes of them, and a handful of other examples, like 28 Days Later and (especially) the TV series Walking Dead. These are what I consider the top-shelf zombie movies. They stay true to the plots that started the genre. All other types of zombie movies are spinoffs of elements within these movies.

In these top-shelf movies, the horror comes from the setting. A zombie, by itself, isn’t that scary. These zombies are (usually) slow-moving and easily outsmarted. The real threat is in the fact that the entire world is overrun with them; there are millions of them out there and they will always be after you. Still-human characters have to find a way to live in the resulting world, and that is where the real drama of the movie comes from. Without normal societal norms, the characters revert to survival mode and you see just how bad human nature can become in the name of survival.

These movies inspire the viewer to ask questions of themselves. What would you do in a situation like this? Would you isolate your family? Would you murder other people who try to get into your supplies? What would you promise your squad of soldiers to keep them from killing each other? Maybe you’d just try to be the last civilized person on the planet, holding true to what you can remember of the law and order that once was, at least for a time. These questions also apply to the oldest story ever told: Man vs Man vs Nature. We live in this world with such questions in the deep, dark back of our minds, and we’ll leave the world (if we’re lucky) not knowing the answers.

The effectiveness of films like those above gave birth to the sub-genres of zombie films. Dawn of the Dead (both the original and the remake) shows us how much fun it can be to be the last man alive, for example. It introduces a light tone into the genre. That led us to Shaun of the Dead, a comedy which shows us the only people equipped to deal with the zombie apocalypse are video game playing slackers in their mid-twenties. The characters from Shaun, however – with their devising of zombie killing strategies and their indulging in zombie killing sprees –  gave rise to the action zombie films.

An important thing to remember about these films is that they are gory. Wait, don’t turn your nose up at that! A lot of people think gory = not scary but gross, but gore does have a place in horror. It’s how you validate your fears. Think of this…. If I were to tell you, “Hey, the Titanic sank,” how would you feel? You probably wouldn’t collapse in tears, even though it was a tragedy. But, if you were to watch the Titanic movie – and actually see the stories of the doomed passengers, then see them die – suddenly the tragedy hits home, it has emotional impact. The same idea applies to zombies, When a movie tells you, Hey, zombies eat people,” you aren’t going to be scared if the camera turns away. But, if you watch a gory zombie movie – and actually see a zombie tear the throat out of someone, then disembowel that same someone right before your eyes – suddenly it strikes home that “Zombies EAT people!”

If it helps those of you who are squeamish, just go into it with the intention of admiring some of the best special effect makeup ever done.

13 crucial movies – for zombie lovers – at Halloween (or anytime.) By The Beau.

First, honorable mention to the TV series The Walking Dead. I know it’s not a movie, but if you want the best example of a great zombie story, go to that.

Dawn of the Dead (1978, original)
– One of the best and most influential movies of the genre. Special acknowledgement for best performance by a mall in film.
Zombie aka Zombi 2 (1979)
– Best of the foreign zombie films. Special acknowledgement for best fight scene: Shark vs Zombie!
Return of the Living Dead (1985)
– Splatstick comedy. Historically significant; the movie that started zombies saying “Brains!”
Day of the Dead (1985, original)
– Sequel to the much-loved Dawn of the Dead. A military bunker is the safest place in the world of the dead, but can the civilian population get along with the military leaders?
Night of the Living Dead (1990, remake)
– An updated and more action oriented version of the original that started it all. Special acknowledgement for best change of an ending.
Wild Zero (1999)
– Not going to make a list without putting a movie on it you’ve never heard of. Japanese zombie film starring a rock band that battles zombies using the power of rock. DVD comes with a built in drinking game, drink when: a head explodes, fire shoots out of something, someone says Rock N Roll, someone combs their hair, and many more.
28 Days Later (2002)
– Best zombie movies with no zombies in it.
Dawn of the Dead (2004, remake)
– Same premise, but different direction, than the original. Strong movie that stands side by side with the original, not in front or behind.
Shaun of the Dead (2004)
– British comedy that is a lovesong for the genre.
Land of the Dead (2005)
– Interesting premise that falls apart with cliché characters and action sequences. Still stands up better than many other movies.
The Zombie Diaries (2006)
– A shaky-cam documentary-style take on the zombie apocalypse. Surprisingly good, better than Romero’s Diary of the Dead.
Planet Terror (2007)
– A modern homage to the cult films of yore. Extra gore, extra cult.
Zombieland (2009)
– Survival comedy that walks the line between homage and parody. Good entry movie for the genre, though it may make earlier films less scary.

Best for Halloween night: Night of the Living Dead (1968).

I suppose it was growing up in Anoka, that warped me into a horror writer. For that, I am grateful. I don’t live there anymore, and I’m happy in my adopted home of White Bear Lake, MN, but I will always carry a certain affection for Anoka. It pleases my little dark heart to be able to post this tribute to the newest event to spawn from my hometown’s creepy cradle: Anoka’s First Annual Walking Dead Pub Crawl – October 13th, 2012.

Halloween has always been a big deal in Anoka, MN – the official Halloween Capital of the World. (In 1937, the town persuaded the United States Congress to award the title.) In the last few years, though, I’ve noticed a certain tameness creeping in to the season – the disgustingly healthy Gray Ghost 5K run comes to mind. This year, celebrations took a decidedly gruesome turn … finally!

Anoka has at least six bars and restaurants in a couple of square blocks. It’s an ideal place to host a zombie crawl. 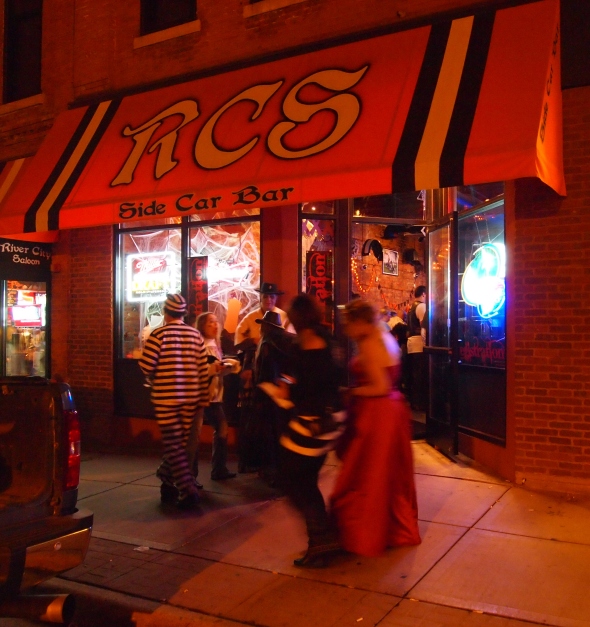 As a creature of habit, I have always tended to patronize the older bars, the bars more familiar to me, like:  Billy’s Bar and Grill, Serum’s Good Time Emporium, and the ever-changing, latest incarnation of the bar where I used to work (which was called Patty’s Pub back then and is currently known as as Beer Belly’s.) The official host bar for the crawl, however, was River City Saloon, a place I had never visited. 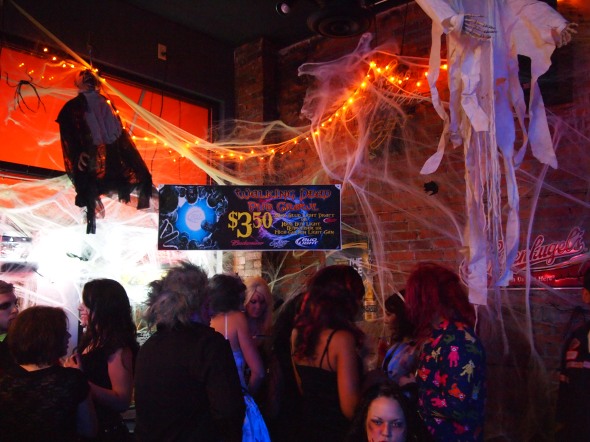 My Beloved and I weren’t sure which bar to choose as our base of operations, so we called some friends who still live in Anoka. They were kind enough to scout out the scene and find a table before we arrived. We met them at about 5:30p.

By the time we got there, my friend – Trish – who had been watching the zombies come out, was wishing she had dressed up for the event. After some discussion, I convinced her that I could do a quick makeup on her for less than $20 – if she was willing to to walk over to Party Papers with me.

The total came to $19.25. We could have skipped the putty/wax, which would have brought the total under $15.00. We bought the basics for a passable zombie and settled in to a corner of a hallway. Fifteen minutes later, we had done this:

I think we should have bought the next size up of the bottled blood. One of my favorite memories of the night involved standing on the sidewalk outside Party Papers, with me throwing handfuls of blood at her … as the Ghosts of Anoka Tour was guided past us. (I wish I had a photograph of that, but I was afraid to touch the camera long enough to hand it off to someone.)

In her simplicity, I think this was my favorite zombie of the night. She was just a little thing, and she absolutely invoked the mood of 1968’s Night of the Living Dead. 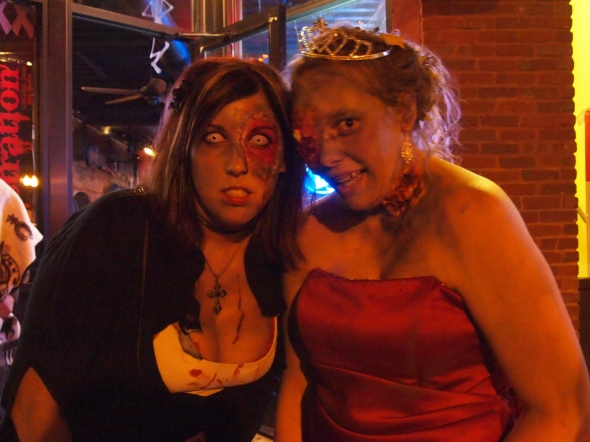 Check out those contacts!

The Zombie-killer half of this duo is Jenny Johnson, creator of the event. I touched base with her a couple of times through the night. She was, by turns, excited, hopeful, overwhelmed and pleased by the success of her brainchild. (She also participated in the Thriller-dance flash mob that happened at 9p.)

I was photographing in the ambiant light of the street lamps. Sorry for the blur, but I kinda like the effect.

I hope, next year, they figure out how to make the music louder. 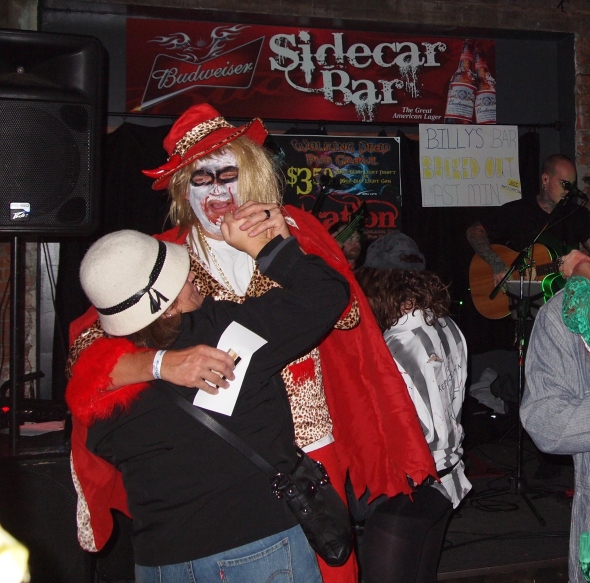 There’s something pretty awesome about watching a zombie grab some meat … for a quick dance. 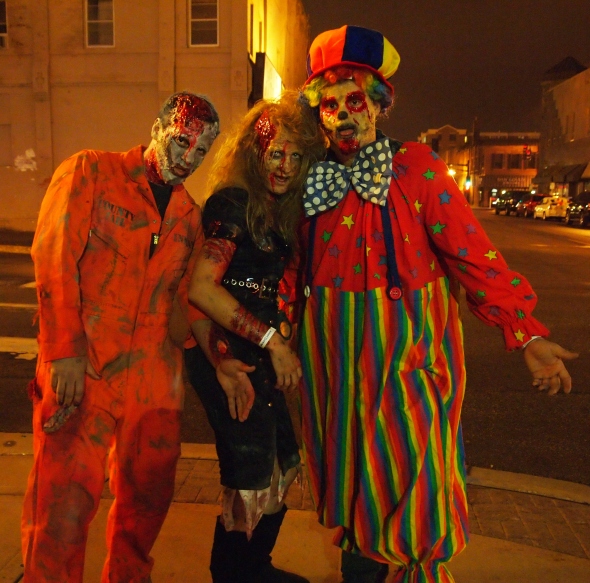 I think the convict / guard pair was one of the cleverist ideas I saw. 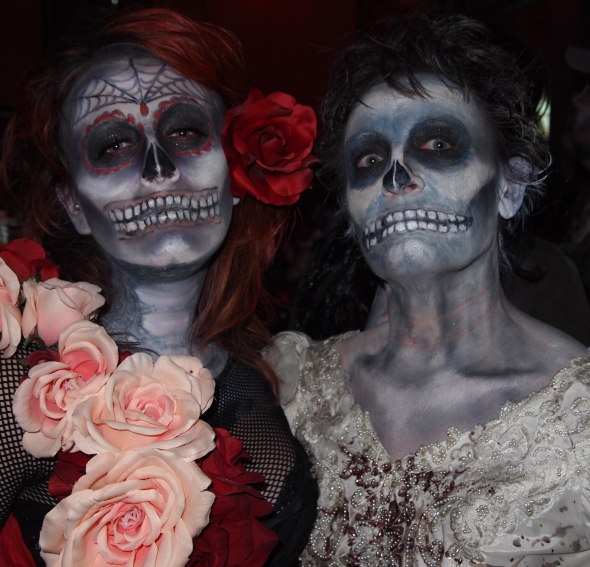 Two of the loviest walking dead.

Look at the detail work on that hand! 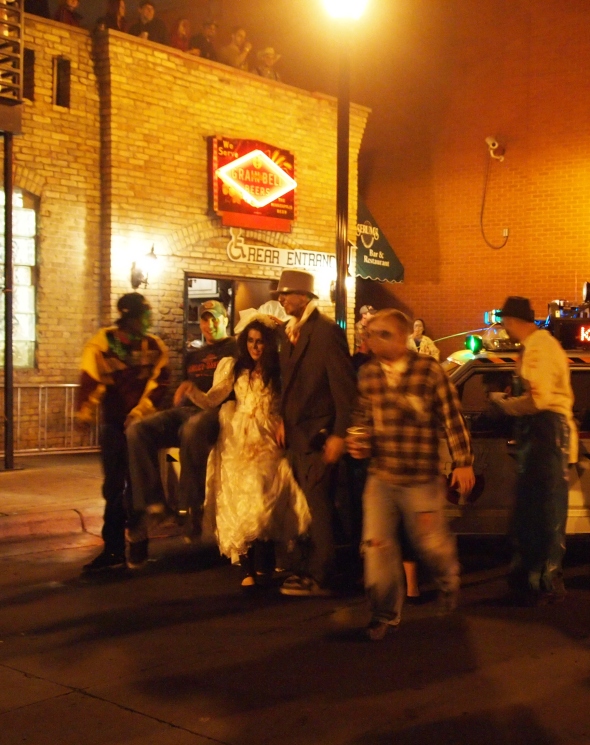 A Ghost-Buster style wagon drew crowds wherever it parked. I liked the way the walking dead all streamed away from it at the same time in this shot.

Just a good ole boy and his woman. Some of the sweetest folks I met all night.

A lovely, elegant couple … but it’s the guy in the top hat that I adore.