Triggering hypomania in search of the muse.

A couple of weeks ago, I signed up for Camp NaNoWriMo in April. I didn’t even know there was such a thing, until I got an email invitation to participate. The atmosphere for camp events appears more relaxed than November’s nano. You can set your own word count goals.You can continue an existing manuscript.  You can revise and/or edit, as long as you can come up with a fair equation for comparing such work to raw prose generation.

At the time, I was thinking, “Hey. My work schedule has mostly settled down to 3 nights a week. The boy seems to have a handle on school. Ogre likes his new job. The days are getting longer … yep, it’s time to settle down and do this.” I carefully examined my available time and set an ambitious but manageable goal: to spend the month of April editing the complete Lizzy novel. I figured the pass I intended to make would require between 80 – 90 hours. (This goal, btw, required me to actually finish writing the ending to Lizzy’s novel in March.) I set to work with a will.

In the last year, I’ve been counting on one of the two effective strategies for generating content: slow, steady, consistant work. I managed to get 50,000 words down in Novemeber 2012 by carving slots of time from my schedule so that I could put my butt in the chair every day for a set period of time. I planned to schedule my way through editing the Lizzy novel too.

Then my boss called to tell me he’s going out of town … three times in March and April. Consequently, I will be back to working more than full-time for three of the next six weeks. And a lot of it is bad: Seven days in a row. Nine days in a row. Working until midnight, then back at the desk by 9:00a the next day. My available time was obliterated.

Then I had a melt down, which I didn’t post.

Then I made a decision to suck it up, which I did post.

Then – the good news – my daughter (of recent button-making fame) called to tell me she is coming home from North Carolina for her friend’s wedding. And she’ll be staying with us for 16 days. I was ecstatic until I remembered the insanity of my work schedule in April. I checked the calendar and discovered that most of her visit does not overlap with my boss’s trips.

Then I called my boss. I explained the situation and told him I would abide by the schedule he’d made for the weeks he was going to be gone, BUT that I wanted a total of four days off on the other weeks. He balked at first, but I held my ground. It’s complicated, but I will only have to work five of the sixteen days she’ll be here. (He’s still pestering me about one Saturday, but I will not yield. What’s he gonna do? Fire me?)

Then I sat down with the calendar again, and recalculated the month. This time, instead of looking for available writing slots, I assessed the big picture.

Spring is coming. My family will be together. My mood is likely to be positive. I figure, maybe it’s time to return to my old ways … to the OTHER effective strategy for making prose happen … getting caught up in the story and succumbing to the muse. (Am I the only one who thinks “the muse” is just a romantic way to describe the hypomanic state?) In my schedule, I blocked out additional space for sunshine, exercise, flirtations, adventures, nutritious and delectable foods, and copious amounts of caffeine, chocolate and liquor.

So now, I have decided not to drop out of Camp NaNoWriMo, but I have revised my goal so I won’t go insane. I will not likely finish a complete editing pass in April, but I can make a big dent.

Let’s see if this works.

A decidedly non-epic but hopeful update.

I’ve been trying to stay on top of my blog reading, even though I haven’t been commenting much this month. Yesterday I was over at Jonathan Janz’s blog and came across this: Every Post Doesn’t Have to Be Epic. (If you’re going to pop over there, though, you really ought to read this one: Born in Halloween, which is epic. It made me fall in love with his writing.)

Anyway, this is about me, not him, right? ;D

I realized I’ve been quiet on the blogging front for too long, and it doesn’t look like there’s going to be anything substantial going up in the next few days, so an update seems in order.

Most important news:
My husband got a job offer!! It’s a good job too – one that he’s excited about doing AND one that comes with a good salary and benefits. Of course, like any good pessimist, I won’t be able to really believe in this almost-Christmas miracle until he starts going to work in the mornings. Check back with me in mid-December.

Granted, my husband’s charm, experience and persistence have something to do with this development, but I have to give some credit to Mark Petruska over at Mark My Words too. He recently wrote a post (Cashing in on Karma) in which he revealed the secret to obtaining a job offer after an interview: dine at Buffalo Wild Wings. Because my Beloved had just interviewed for a couple of positions, I dragged him out and forced him to eat wings. Three days later? Voila!

NaNoWriMo:
I’ve done far better than I thought I would with this project. The writing itself is terrible, but I’ve never plotted a book so fast in my life and it has good bones. I think the process is teaching me that most of my past approach to writing was just dead wrong. I’m starting to think hot, hurried and horrible-if-necessary is the way to go for a first draft. I’ll guess we’ll see when I go back to flesh it out.

I’m behind on word count, but not so far that I don’t think I can catch up. It will be close, but I think I can do this thing! I’m at my job right now, stealing a few minutes to get this composed and posted. I’ll get as many words as possible tomorrow in the early afternoon, then I’ll be back here at the hotel until 1am. The situation absolutely guarantees that I’ll be doing the stereotypical wild-eyed, sleep-deprived, coffee-swilling, nano-writer thing come Thursday and Friday … because I have both days off. I believe this will both amuse and terrify my loved ones.

Expressions of encouragement would be much appreciated, even though I’m not likely to respond until I either win or lose at 12:01a on the 1st.

Now I need a wee bit of epic … how about this: 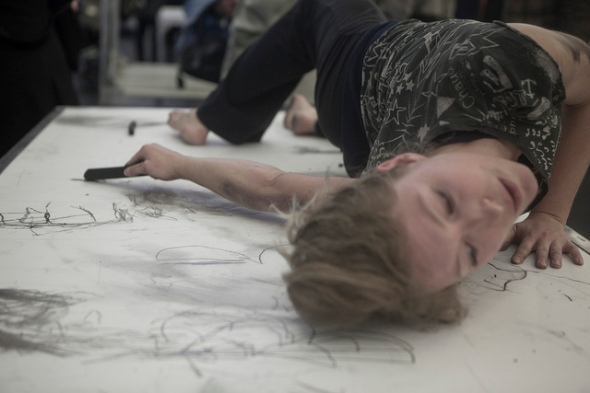 Click the pic to go check out the fascinating photostream which documents this art. From the stream: “«Human Writes» is a performative installation that reflects the history of human rights and the continuing obstacles to their full implementation.”

Courting Creepy: 13 disquieting movies – for writers – at Halloween (or anytime.)

In all of the following movies, a writer is a major character. Some are journalists, some novelists. Some are successful, some not. Some are talented, some hacks. Some start out crazy, some maintain their sanity throughout the film, and some fall apart in the end.

(I just realized that almost all of them are male. Even Mary Shelly shares her film with Byron. Interesting.)

Aside from the ability to grow a beard, what the writer-characters have in common is an inner demon that leads them into a precarious situation. For the general viewing audience, it is the unfolding of the precarious situation that makes these movies fit into the horror or thriller genre. For the writer, however, these movies are disquieting not because of the trappings of the plot, but because of the view they offer of another writer’s demon. (Having been taught early that fiction writing is unconsciously autobiographical, it’s hard not to see through the writer-character to the real writer behind him.)

So what is this figurative demon, exactly? I think it’s just another face of a writer’s muse. Lately I’ve been taken by the idea that the muse (the drive to write) rides the writer, in the same way the Loa ride a priest or priestess in Haitian Voodoo. In these movies, the demon looks like alcoholism, or narcissism, or neurosis, but at its essence, it’s the temerity to believe that one should – and arrogantly enough, could – become a writer.

I have a love/hate relationship with my own demon/muse. I don’t mean that I go back and forth between the two emotions, I mean I always feel conflicted about its presence in my mind and heart. I’m glad that I’m driven to write. But sometimes (often) I wish I weren’t, because wouldn’t that be easier? Yet I can’t imagine what it might be like to not feel that incessant you-should-write drive. (A part of me believes that the non-writers I know secretly want to write, and are just better at hiding their insane need than I am.)

Courting Creepy: 13 disquieting movies – for writers – at Halloween (or anytime.)

The Lost Weekend (USA, 1945)
– When you read IMDb’s summary, there is little mention of the writerly angst that triggers this classic alcohol binge.
Sunset Boulevard (1950)
– Non-writers think this movie is a drama about an aging silent film star. Writers know that it is a nightmare depiction of selling your soul to make a buck.
The Shining (USA, 1980)
– Of course. I might as well admit now that FIVE of Stephen King’s movies made this list. Constant Writer is a man ridden by an awe-inspiring muse.
Deathtrap (1982)
– The theme is dark, but this is nowhere near a horror movie. Special acknowledgement for best wisecrack:
Sidney Bruhl: (when asked how good the play he just read is) I’ll tell you how good it is. Even a gifted director couldn’t hurt it.
Gothic (1986)
– Special acknowledgement for being the loveliest movie on this list. (Though there is something arresting about the color scheme of The Number 23.)
Misery (USA, 1990)
– Special acknowledgement for creepiest animal: Misery the Pig. (But then I am a firm believer that all pigs just want to escape into the woods, grow tusks and eat you. I also think pandas probably deserve to go extinct. But I digress.)
The Dark Half (1993)
– I don’t really understand why this movie didn’t make more of a splash. Timothy Hutton does a bang up acting job and George A. Romero does a faithful adaptation of King’s book. And there are creepy birds.
In the Mouth of Madness (USA, 1994)
– Lots of little details to love in this film. I especially like the drive to Hobb’s End. Watch for the Humane Society notification in the credits.
Midnight in the Garden of Good and Evil (1997)
– Special acknowledgement for the coolest job ever: invisible dog walker.
Secret Window (2004)
– Special acknowledgement for best portrayal of what writer’s block really looks and feels like.
1408 (USA, 2007)
– This film has two distinct endings, one in the theatrical release and one in the director’s cut. If you want it the way King wrote it, go with the director’s cut.
The Number 23 (2007)
– Special acknowledgement for being the movie most likely to make you practice your addition skills for days after seeing it.
Zodiac (2007)
– Robert. Downy. Jr. And some kid named Jake. (I’ve got a review of this up elsewhere on the blog.)