Those flowers are called Peruvian lilies, aka Alstromeria. They are inexpensive around here, and readily available in floral shops and grocery stores. Usually, there’s nothing particularly magical about them. If you look closely at the bouquet, you’ll notice a few branches of pussy willow tucked among the blooms. It’s spring, so those aren’t difficult to come by, here in Minnesota, either.

How is this bouquet magical then?  Let me tell you its story.

When I was working at the nature center on Friday, one of the naturalists cut a posy of pussy willows branches for me. (Apparently the bush needed pruning.) When she brought them to me, a stray thought popped into my mind, “These will look pretty with the flowers Ogre is bringing home tonight.”

It was an odd thought. I don’t get flowers every Friday, or every holiday weekend, or every Easter. In truth, I don’t get flowers with any sort of predictable regularity, nor do I get them particularly often. I mean, he does do it a couple time a year, I suppose, but it’s not a big thing for us.

I noted the thought, brushed it aside, then got on with my critter tending.

After finishing up at the nature center, I did some other errands and got home later than usual … late enough so that Ogre had beaten me there. He greeted me with a kiss, took some stuff out of my hands, and said,” Oh. I got you some flowers.”

I did confide what I’d thought earlier, btw, and reminded him that this kind of thing is happening between us more and more often. He thinks I’m cute. He always thinks I’m cute.

Oh! Now that I look at this snapshot, I’m realizing the flowers seem to have another magical property. The cat hasn’t chewed on them, or knocked over the vase, as we both expected him to do. (Perhaps that behavior pattern explains why I don’t get flowers more often. Ogre is certainly inclined to spoil me, but the cat has been living with us for about thirteen years, which has made it difficult when it comes to flowers. And THAT probably explains why I do get *pharmaceutical-grade chocolate on a regular basis. The cat has no interest in that.)

If you have been reading this blog for a while, you know that we’re trying very hard to put ourselves in a position where we can move permanently to North Carolina. Our daughter moved there almost six years ago ans we want to reunite our family in a sane climate. (Long-term readers also know that I despise Minnesota winters.)

Right now, I’m recovering from this last season pretty well. It was a mild winter here, and spring is springing.  All the ice is melted off the pond out back. We got our first thunderstorm of the year just last week. On the warmest days, the birds actually sing a little as they bask in the sun. A few blades of grass are turning green.

How much more spring-like could it be? I mean, here’s the forecast–with NO below-freezing temps in sight:

Well, on Easter Sunday, my daughter sent me some snapshots of what she was seeing a she strolled around, texting me.

Here’s how much more spring-like it could be for us: 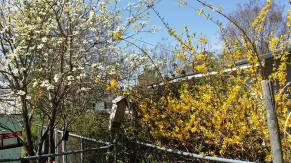 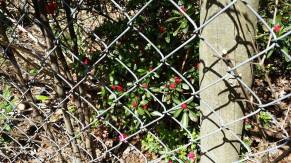 We gotta get out of this state.

Not long after I put the camera away, I tried to navigate one of the hills around here and failed. I’m going to go put an ice pack on my shoulder now. Bleepin’ winter.

Here at my “professional blog,” I’ve been concentrating on all the good buzz-words: creating quality content, and organizing a schedule of evergreen / pillar posts, and thinking about SEO. I’m fine with all that, and it’s been paying off in terms of total hits, but sometimes I feel like I get a little lost amongst those things.

Lately I’ve been doing an awful lot of personal blogging at a secret location — daily blogging, in fact. It’s felt good to just babble, and the denizens of the secret location seem to like it when I do. I think, maybe, this blog needs a little babbling too.

Remember the definition of “paranormal”?

Para- / par-ə / Prefix. ”Alongside, near, beyond, altered, contrary to.”
normal / nawr-muhl / Adjective. “Conforming to the standard; usual; regular; natural.”

Truth is, no matter how much I love all that is traditionally paranormal, I spend an awful lot of my life just the tiniest scootch to the left of plain-old-normal. And that means that I deal with all sorts of mundane issues and problems. It means I have the same kind of personal dreams as about 99% of the population. It means I’ve got to use this time of year — when ghosts and monsters and Jacks are far from the minds of most folks, including me — to pursue my non-paranormal dreams.

In the next few days, I’ll share a couple of tools I found to help me with my own classic (if mundane) resolutions: creating a healthier body and improving my financial situation. I’ve been using them since before January, and I think they have had amazing results. (I’m down 10 pounds & eat vegetables occasionally now, AND I have more than $500 in an actual savings account For me, these developments are nothing short of miraculous.)

Now is the time to deal with snow and cold and ice. It’s the time to get through each day in such a way that will lay a good foundation for future, more-paranormal-activity-friendly months. It’s the time to do the WORK of keeping one’s New Year’s Resolutions, and that’s what I’ve been mostly doing in these last couple of months.

Still, the light changes a little each day. In 37 days, it will be equinox, and I can feel it coming. I covered a shift at the #ParanormalHotel last week, just to help out in an emergency. As I drove over at 5:57p it was not yet dark.

By the way, a couple of weeks into the job, Langston had an especially bad night, in an especially bad weekend, and ended up being let go. He made a questionable judgement call and the consequences were really expensive for the hotel owners. The decision came down that he’s not mature enough to handle the night shift. Since then, he’s found a new job working at the deli counter of a local grocery, so it’s all good.

Sometimes, when the wind stops blowing and the sun shines, I can sense the promise of spring in the air. The other day, when The Boy and I driving to school with the windows rolled partially down, we heard this:

It was only one refrain, and we couldn’t see the little guy, but we both instantly smiled. Sadly, the invisible bird was a bit premature, as the weather is not actually spring like at all. I remember having winters like this as a child, but The Boy doesn’t … it’s been that long since we had this much snow and cold here.

Even in this state of hardy snowmobile-loving, ice-fishing souls, the zeitgeist is that we’re DONE with this crap: 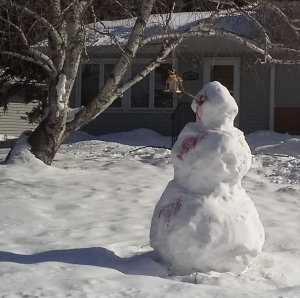 DREAMS OF GHOSTS AND DEMONS?

I’ve been sleeping often, long and deep for a couple of months now, but I think that’s coming to an end … thank God. I hate feeling tired all the time, and I especially hate descending so deep into unconsciousness that I don’t dream. Or at least don’t remember my dreams.

Apparently, two nights ago, I talked in my sleep. The Ogre tells me that I rolled over to tell him, “I didn’t think your horns would be so big.” He attempted to get me to expound, but that’s all I’d say.

I’m going to assume that I encountered a satyr or a talking beast of some sort in my dreams, because I don’t want to be consorting with demons, conscious or not.

Of that, I have no memory, but I had a dream within a dream just last night. Creepy as hell. The dog and I had fallen asleep on the sofa. At some point, he decided to move to the floor, which woke me slightly. I re-positioned myself and drifted back toward sleep. Then I “realized” someone was standing across the room, in front of the TV, (which was off) just watching me. The presence was male and not benevolent, but not terribly threatening. At least he didn’t make any move to approach — which was creepy in its own way, because it made me understand that it wasn’t just one of my menfolk. He was large, and had a sort of dark energy about him. I couldn’t make out any details. I actually tried to see him more clearly, so I could determine if he had anything that could be termed “horns.” As far as I could tell, he didn’t.

Then I “realized” I was dreaming. I got up and went to the bedroom, to cuddle in with Ogre. When I got there, I tried to wake him up a little, just so he could soothe me. But he wouldn’t wake. I grew increasingly insistent and scared. I was shaking him and shouting his name when I woke up … on the sofa.

(Yes, I had seen the latest Walking Dead episode earlier in the night.)

Once I’d actually gotten up, gone to the bedroom, and easily awakened my husband, I felt much better. The moment I knew I had just been dreaming, the events of the dream became story fodder. And that’s why I love dreaming, even when it’s frightening. It means I’m going to be able to write fiction more easily soon. In fact, it means I’m going to have to.

And that brings me full circle back to the first kind of dream in this post, doesn’t it?