NOW: I mentioned, last week, that there are two movies in the theaters right now that I want to see. We haven’t made it to either yet. I don’t see anything great on the horizon, so I concentrated on Netflix and Redbox this week.

& ALWAYS: I’ve been working my way toward a better understanding of what I’m doing with the Macabre Media posts. A while back I started dividing my finds into “now” and “& later.” Thanks to Netflix and Redbox and Youtube, determining what belongs in which category can be confusing. Here’s the new rule:

If an item is posted in the NOW section, I have seen (or in some way experienced) it, and am actively recommending it. NOW items are immediately available to you if you have access to the same basic services I do.

If an item is posted in the & LATER section, it may mean that it has not yet been released, but it may also mean I have become aware that something of potential interest is currently available, but have not yet sat down with it.

YOUR MUSICAL INTERLUDE: Strange Things by The Sparrow Quartet

Here’s a show that is totally off-topic for this blog, but I am completely addicted. Kevin Spacey and Robin Wright are riveting.

If you haven’t seen it yet, you have time to watch the first two seasons on Netflix streaming before the new season starts. That is, of course, if you want to do it a reasonable pace. Ogre and I came to it late, and watched the whole thing in about two weeks, but that’s crazy, right?

The third season is expected in February 2015.

UNDER THE SKIN (available in Redbox right now, also via Netflix DVD)

I can’t say I’m really recommending this film, but I want to mention it while it’s still easily obtainable. If it’s something you want to see, now is  the time — when you don’t have to invest much money or time into it.

I pretty much hated Under the Skin (except for some beautiful visuals) while I was watching, but now I’m rather glad I’ve seen it.

It is extremely slow-paced and art-y. I guess I’m just old school — I like accessible movies that happen to be artistic and layered. The central question of the movie is pretty cool, and there are a couple of great moments. If you’ve seen it, let me know what YOU thought.

BTW, did you know that you can use Redbox in much the same way you used to use a brick and mortar video store? If you create an account online, you can view the current contents of all nearby kiosks, reserve titles, then go pick up your movie(s) at you convenience. Start here:

This week, I noticed that the first season of WGN’s Salem is currently available on Netflix streaming. I never caught an episode but was intrigued. If you’re in the same place, now’s your chance to see if the show is for you.

I have confirmed that the series has been renewed for the 2015 season, and is expected to begin in April.

The two-season cult series, Twin Peaks, is available on Netflix streaming. I have no idea why I didn’t watch it back in the day, but I’ve added it to my list because time has made me curious AND because I just found out from Rolling Stone that Showtime is bringing it back in 2016 as a 9-part miniseries.

I’m going to have to pony up the cash to re-subscribe to Showtime, aren’t I? I already miss: Penny Dreadful, Shameless (don’t judge me), Ray Donovan, and Homeland.

Thirteen years ago – in what I now recognize as a 3-day-long manic state – I made a tripod website called Dark Touchstones. (Remember tripod websites?) As a special treat to myself, I spent much of Halloween day bringing that content to The Paranormalist. Have a look by visiting Dark Touchstones – a lifetime’s worth of creepy stuff, circa 1997.

NOTE: Most of the tags listed below actually refer to the content of Dark Touchstones. (Apparently I can’t tag pages, only posts.)

P.S. If I were writing Dark Touchstones now, my favorite authors (with their best) list would now have to include Joe Hill and Heart Shaped Box.

I didn’t spend the whole day in front of the computer, though. At about 5p, my 16-year-old son and I decided to raid the old costume trunks and take our dog trick-or-treating in Anoka. (We might be past the age for such things, but Fierce Guard Dog is only 13 months old.)

I donned the dog-suit and fashioned myself a leash and collar from a scrap of red velvet, duct tape and a belt. We put our dog in a one of my favorite t-shirts. (Get it? I was the dog, the dog was me.) The boy opted to dress as a rather dashing pirate. As we rummaged for pirate-y accessories, we found a pair of devil-wings that looked to be the right size for the dog, so we put those on him too … which messed with our “theme” but looked cute. 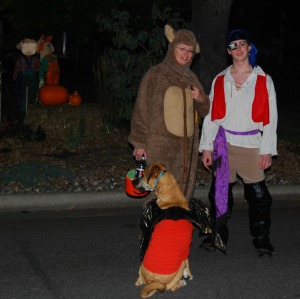 We didn’t really trick-or-treat of course, though some friends we visited did scrounge up a biscuit for Fierce Guard Dog. Instead we met up with my husband for a walk through the loveliest Halloween evening we’ve had in years. Sadly, there were few costumed children dashing through the warm night, and most of the houses were dark, their stoops devoid of pumpkins. I am reluctantly beginning to believe that Halloween, as we knew it, is dying.

Still, the crescent moon rode bright in the cloud streaked sky, the leaves crunched as we kicked through the gutters and the dog’s devil-wings flapped as he pranced along beside us.

Now, to finish my nostalgic day, I’m going to settle in with a handful of fun-size Milky Way bars and the classic 1978 film, Halloween. (In which there are many glowing jack-lanterns, and my favorite holiday is eternally preserved.)