I’m giving myself  25 minutes to write this post, then I’m heading down to the pool. It will not be perfect, and I’m not going to spend time trying to make it so. (Yeah. We’ll see if I can actually live with that.)

Long term followers have figured out by now that, this year, I’m not doing things the way I usually do. I honestly don’t yet know if I’ll be doing any Halloween-centric posts in 2016. It’s weird, I know, but my heart is in my fictional world right now, and deeply resistant to creating evergreen-style blog content.

That said, I really miss blogging, so I think I’m going to use this space, for a little while anyway, as a personal diary, more than a professional platform. I’m going to write about the journey I’m on, the one in which I finish a full, first draft manuscript in a single season. This is my boss-fight, as my son would say, and it’s worth journaling.

I’m going to loosen up on the structure here at The Paranormalist, and write more often, more briefly, and about whatever is going on in my life on a given day. Thinking too big and being too concerned with theme has already prevented me from sharing some events that might have made good posts. (Recently I sold one inch buttons from a gypsy tent at a pagan festival. Our 15 year old cat died very suddenly, and I think he lovingly haunted us for a couple of days. We’ve had our first brush with a hurricane. I finished a kick-ass detailed outline for a novel that I’m going to write the first draft of by the end of November.  (See, I’m not going to go back and fix that grammar.)

This week’s WordPress photo prompt is “Quest.” Since Friday, I’ve been thinking about what majestic and intriguing photo I might already have, or could take, to symbolize this quest I’m on to make a full and rich life here in North Carolina. And that has gotten me precisely nowhere. I’ve locked up.

The truth is, my most concrete quest right now is my fiction work. It’s what I think about through the day, before I fall asleep, and the moment I wake up. And this is what it looks like right now: 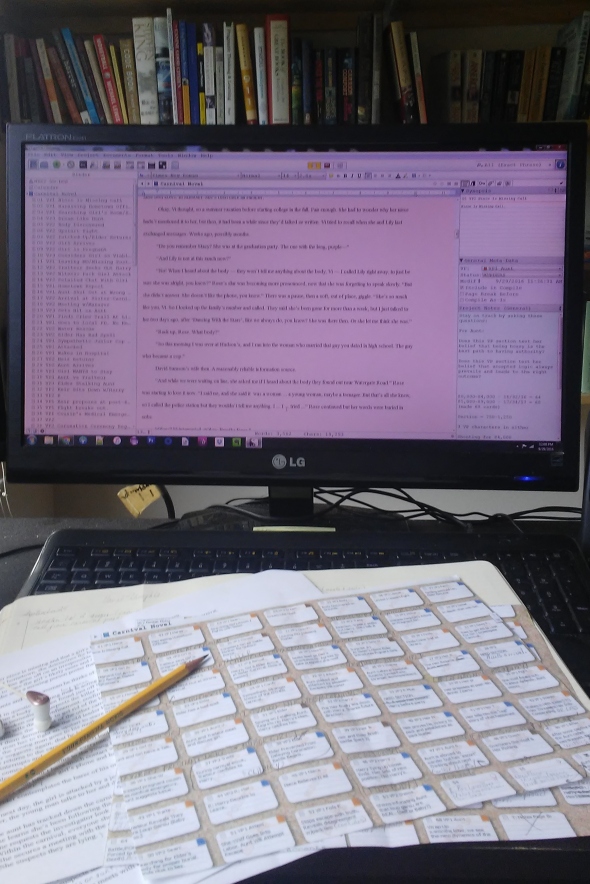 So, I’m going to take that notebook, outline, and my laptop down to the pool  — which is likely to be deserted now that people here think it’s autumn, and too cold to swim — and I’m going to get back to work.

PS: As a MN native, I can tell you that it feels a LITTLE like fall. It is NOT too cold. And if this long range prediction, based on past history is any indication, I’m about to have the longest, most beautiful autumn of my life.

Here’s where I will link to some of my favorite entries for the QUEST prompt  from others:

(I’ll add some when I’ve had time to browse the entries, so feel free to check back.)

Since moving to North Carolina from Minnesota four months ago, I’ve been extraordinarily aware of all the creepy crawlies that share my new biome. It seems like each week reveals a new species for me to contemplate. And by contemplate, I mean decide if the species in question freaks me out, or if it’s just interesting.

When it comes to the Organ Pipe Mud Dauber / Blue Devil Wasp, I’m going with interesting — even though its young-rearing behavior is … well let’s say, off-putting.

This set of NARROW tubes is a Blue Devil nest. (Narrow is this week’s Post A Week photo prompt.)

I came across this construction at a local park, while on a Pokemon hunting excursion, with my daughter (who has been living in NC for seven years or so.) This particular nest is attached to the underside of a park shelter’s roof, in plain sight of the picnic tables below. My daughter identified it as a “mud dauber nest” but didn’t know much beyond that. Later, after the hunt, I was compelled to hit the interwebs to find out more.

It turns out this is the home of a rather special mud dauber. (Not rare, but certainly creepy-cool.) Several species of mud dauber live in North Carolina, but only one builds a nest that resembles a pipe organ.

After reading up on  Trypoxylon politum, I now know that the big, blue-black wasp that was flying around us was the father Devil, guarding the nest. (The species is harmless to humans, and only stings people when tormented.)

I also know that those tubes were crafted by the mother Devil, who transports innumerable tiny balls of mud to the site, and painstakingly builds individual cells into which she will lay eggs. Then she stuffs each cell full of paralyzed spiders, as food to be consumed by her larval offspring. (Whimper.)

You can find more detailed information about the creature, along with other photographs, at the following links:

Here are some of my favorite entries for the NARROW prompt  from others:

A Haiku on “Narrow” | New York City Pocket Park | Jazz Alley | paths & journeys | pretties in gutters | crematorium | through the forest | butterfly from a different angle | crab spider in rose | the light | nope, nope,nope | narrow street in Prague | a reference to “Laura” | mountain goats | straws | child’s focus | boardwalk in the woods | Yellow | Annie’s Canyon | abandoned kitchen | too narrow for a wheelchair | palm tree | eye of the needle | alley in Hoi An, Vietnam | communications tower in Tasmania | a bee’s passage | American Bittern | Narrow Bridge in G Scale | in the side mirror |

On Fridays, when the weekly prompt for the Post A Week photo challenge is revealed, I try to think of a way to respond that will suit the theme of my blog. My first thought for this week’s prompt Numbers was to seek out the number 13, but even though I kept an eye out all week, 13 was elusive. Other numbers, though, prominently featured in my week, in fact I was haunted by them.

As recent transplant to a new state, I’m desperately trying to figure out how to get around. This process is complicated by my multiple driving phobias. (High bridges, high speed, ramps, forced merges, and getting funneled against my will, to name a few.)   I am determined, however, to establish some comfortable routes, and carve out a territory that feels safe. That means I’m spending an awful lot of time pouring over maps, trying to figure out how to stay off the roads that have numbers but no names.

#FunWithFilters — I see versions of this and other local maps in my dreams. If only that were actually helpful in any way.

I had one slight territory expansion success this week. I headed east from Raleigh, in search of two small towns promised by the maps. I found and explored both of them. (One even has a metaphysical shop just a block off Main Street, but that’s another story.)

The excursion was my last ditch attempt to find a good photo op for this week’s challenge. I meant to go to a graveyard — because a graveyard is filled with stories, histories, and mysteries, each told in a few  cryptic words and numbers — but I failed.

(I drove past one that looked promising, but couldn’t figure out how to get back to it. Once the route is more familiar, I’ll make my way  back.)

Luckily, I have a whole folder of photographs taken at graveyards. Here are a few I don’t think I’ve ever published, that have interesting numbers:

This was taken in the Old Burying Ground, of Beaufort, NC, a cemetery that is full of some of the most complete stories I’ve ever found in a graveyard. (There are more photos from the same beautiful cemetery here.)

The iron cross appears to have a ‘4’ on it, but it’s actually a confederate battle flag.

The ’12’ marker at this grave-site is keyed to a pamphlet available at the graveyard. The pamphlet reads:

“(12) Jechonias Willis (1838-1862) — A Beaufort man killed when Fort Macon was taken by the Federals. Beaufort members of the garrison were brought home on a flat and released on parole. The body of Willis was brought at the same time. General Burnside himself stood at the wharf witnessing the joyful reunion between soldiers and families. Then, as the pine box containing the body of Willis was claimed by sorrowing loved ones, sympathetic tears rolled down the general’s cheeks.”

This sad and simple stone, located in White Bear Lake, MN, is a glimpse into history, and we must try to imagine the story behind the memorial, using only the clues provided by the numbers.

This gravestone, which caught my eye precisely because it is disappearing, had just enough visible information that I was able to identify the deceased by using the excellent database at Find A Grave. There I learned that this is the grave of the founder of a northern MN city named Staples.

Which leaves me with a new mystery: Why is the founder of Staples buried in Anoka, 119 miles away from his namesake city?