The best way I know to make you smile.

I’m not a smiley person. (Shocker.) I grin a lot. And I laugh all the time, but I’ve got one of those resting serious faces. Of course I am quite capable of soft, sweet, gentle smiles, but those are reserved for close family and friends.

Also, I don’t take a lot of photographs of happy-smiley subjects. (Outside of family snapshots.) When I’ve got the camera, I’m usually going for atmospheric, or evocative, or — yeah — creepy.

For both these reasons, this week’s photo challenge stumped me for a long while. Tonight, though, when I went back and re-read the prompt, and I got an idea.

This week, show us a smile (yours or someone else’s), make us smile, or both.

For years now, I’ve been gathering up “paranormal” themed memes / funnies / comics, and curating a collection of them at cheeseburger.com. (Which you may remember from the LOL Cats mania in days past.) If you’re looking for a grin, a snicker, a chortle, or a snort, you might find something to please you at my gallery.

Pop over to paranormallols.cheeseburger.com to see my collection.

Of course, I didn’t take any of the photographs used to make those memes, (except one) nor did I make the memes themselves (except that same one.)

So, if I left it at that, I would be kind of cheating the challenge, wouldn’t it?

Alrighty, then, I’ll share a photograph I took a few years back, when I was training our older dog. Every time I see the picture, it makes me smile.

Here are some of my favorite SMILE responses from others:

How far would you go to get to your favorite place?

This week’s photo challenge is to show a favorite place … a happy place, a secret spot. In the first half of my life, I had many favorite hideaways, almost all of them outdoors.  As I begin the second half of my life in a new part of the country, though, I have to find my new happy places.

This is a shot of my local park, taken back in October, 2017. The foliage has already started to die down for the autumn, but the grass you see here would have been up to my knees. In the foreground of the photograph, you can see a bit of railing. When I took the picture, I was standing on a bridge-like path that runs through the park. The walkway is designed this way to keep folks safe from the wildlife, not to protect the habitat from traffic. This is a common arrangement, here in North Carolina, and it’s a wise precaution. One that I’ve taken seriously because I know just enough to know that there are some dangerous critters hiding in all that grass and in the underbrush.

As a native of Minnesota, I was comfortable with my biome. I knew which plants to avoid. I knew how to stay clear of the icky but harmless creepy-crawlies that inhabited the areas I prowled. I knew where the dangerous critters might be, and what to do in the (unlikely) event that I encountered one. In most cases, I had a good chance of seeing the trouble coming. (‘Pretty hard to miss a bear or a temperamental deer, if you’re paying attention.)

In Minnesota, there were two (rare) species of venomous snakes, and both were polite enough to stay within a confined, easily identifiable, ecosystem and come equipped with a rattle, in order to warn an unwary trespasser.

One other significant, hard to detect, threat came in the form of the Northern black widow spider (L. variolus) — the least aggressive of all the widows.

As a transplant to North Carolina, I’m less confident. Here, instead of staying alert for big stuff, I have to watch for sneaky dangers. Here, the Northern widow is joined by both Southern (L. mactans) and brown (L. geometricus)  widows. Here there is also the brown recluse (Loxosceles reclusa) which creeps me out more than the widow sisters. Probably because the bite of a recluse causes something called “external tissue necrosis.”

On the non-venomous front, we have a whole host of spiders that I’d rather not surprise, including the Carolina wolf spider, the largest wolf spider in the US. (It can be as big as the palm of your hand.) And let’s not forget the possibility of running into the uncommon but not-unheard of fire ants that are trying to expand their territory up from the deeper south.

The biggest difference between my old stomping grounds and my new home, though, lies in its venomous snakes. Here, they are not exactly rare. And there are SIX of them — three rattlesnakes, and three silent snakes: the copperhead, the cottonmouth, and the coral snake. (Which is both the rarest and the deadliest of the bunch.)

Being the cautious sort, I’ve pretty much stayed on the paths and boardwalks as I’ve been exploring my new state.

Today, though, I realized that the season has opened up more options for a just a little while. Right now, the undergrowth is mostly still dormant, so I can see what is underfoot much better than I will be able to once the verdant growth begins. The bugs aren’t yet active. The snakes will most likely be slow and dimwitted from the cold, if they are out at all.

Today, I stepped off the path. I followed the little stream that runs through the park instead. It was a joy to be able to get close to some of the details that have been hard to see from the approved walkways. 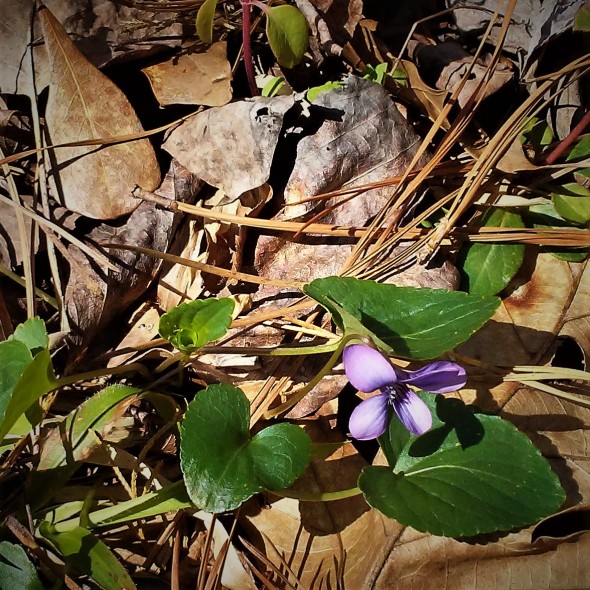 (Can you tell I was closely watching the ground?)

Then I came to this, one of Mother Nature’s little personality tests. 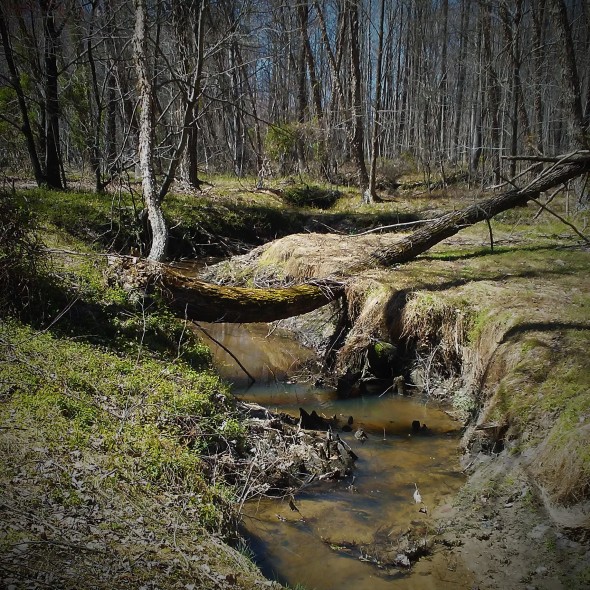 Which led me to a question — a kind of poll, if you like — that I want to ask you:

If a new favorite place might be on the other side, would you cross by walking over the fallen tree (spiders) or or by wading through the water (snakes)?

Here are some of my favorite ‘FAVORITE PLACE‘ responses from others:

I had to think long and hard about this one, because I pretty much love my life as it unfolds; I’ve reached an age where I decide what I’m doing in any given moment. (Not that I always choose the right thing to be doing, but that’s on me.)

The truth is, I’d almost ALWAYS rather be tending a nice, manageable backyard fire. Preferably with my husband, my family, a good friend or ten,  a couple of dogs, a cold beer, a hot mug of something tasty, some marshmallows … or any combination of such treasured companions.

I have to confess: I didn’t take this photograph. It’s actually a shot my son took, when he was visiting his girlfriend in MN last summer. But it’s the only campfire picture in my photo files, so I stole it. I did a little cropping and re-touching, and adjusting. I played with it until it looked “right” to my nostalgic eye.

You see, I haven’t been able to sit fireside since we moved to NC, two years ago. (We’re in an apartment as we explore the state, looking for Home.) The closest I can get to a fire in my current living situation is to creep down to the charcoal grills late at night, once every month or two, to burn up journals filled with Daily Pages-style ramblings.

These charcoal and paper fires are not satisfying.

So. I’m using this prompt to remind myself to get out there and find a way. I don’t think we’ll be buying a house yet this year, but I know there must be campgrounds where fire-making is allowed. I guess I’m just going to have to learn to camp.

Baby steps, right? The Ogre and I (and the dogs) took an impromptu trip to the Uwharrie Mountains, on Friday. It was just a day trip, and a good one, but we only walked a short trail before we had to head back home. We didn’t have time to explore campground options. (And I was unable to convince him to find an all-night diner and park in the lot. Between the two of us, there was too much uncertainty about how likely it was that we’d get ourselves rousted or arrested.)

Does anyone know if it’s okay to “camp” in your vehicle? Apparently, I have been deeply scarred by too many horror movies that prove the thin fabric of a tent is no protection from the serial killers and monsters that inhabit campgrounds. I’d feel a lot better if I could sleep in my van.

Here are some of my favorite I’D RATHER BE responses from others: