Here it is, the first of September, the end of Labor day weekend. There will still be hot summery days, and thunderstorms, but harvest season has come. In that spirit, I’d like to share a harvest song:

Here are the traditional lyrics of this British folk song which pre-dates the 17th century:

They hired men with the scythes so sharp
to cut him off at knee.
They rolled him and tied him ’round the waist
and served him barbarously.
Then they sent men with pitchforks strong
to pierce him through the heart.
And the loader served him worse than that
for he’s bound him to a cart.

Stephen King will be featured on PBS’s celebrity ancestry research show, Finding Your Roots.  His episode – the first of the season – is In Search of Our Fathers, and it will air Tuesday, September 23rd at 8/7c.

As usual, I’ll give you a heads-up a little closer to the broadcast on my Twitter / Facebook / G+ feed.

Catch up on Sherlock, before the new season starts!

2014.01.22 UPDATE: The streaming option at PBS has now expired. All 6 episodes from seasons 1 & 2 are available via Netflix streaming: HERE.

I saw this notification from PBS and thought I might not be the only one who is just discovering the PBS Masterpiece Mystery series, Sherlock.

I stumbled onto the show in the last couple of weeks. Prior to that, I knew the show was on TV, but – when I first heard about it – I wasn’t too keen on the idea of a Sherlock Holmes adaptation set in present day.

I think I was under the weather when the first episode was recently rebroadcast. Too lazy to look for something else, I watched it. It was quite entertaining … in large part because of the relationship between Holmes (Benedict Cumberbatch) and Watson (Martín Freeman.)

So far, I’ve seen A Study in Pink, The Blind Banker, and The Hounds of Baskerville. All of them took an interesting, even sly, slant on the classic versions. The series is both fresh and respectful. (And there’s a fair bit of funny – always a good thing.)

The new season starts this Sunday, but you can catch all the previous episodes online.

The Paranormalist gets cozy.

Last night, instead of watching another great horror flick, I settled onto the sofa – properly equipped with a cup of tea and my knitting – to enjoy a Miss Marple mystery. As my cats passive-aggressively dueled for my lap-space, and my dog warmed my feet, I added another 2-3 inches to the baby blanket I’m hoping to finish before Solstice eve. (One of my goals is to knit an item for charity each season. This one, I think, will be dropped off at the hospital with a request that it be given to the next baby born to a young single mother.) When the movie finished, I went to sleep. It was not yet three o’clock in the morning.

Last night was a portent of things to come. My blog is likely to … soften a bit in the next month – for two reasons:

1) Despite my general dislike of the yuletide season, I am not entirely immune to the warm fuzziness of Christmastime, with its sentimental music, uplifting movies, and incessant good cheer.

2) My autumnal bout of hypomania has all but faded away. Coming to this realization so quietly is a good thing. By acknowledging and accepting what is happening, I am less likely to spiral into a depression. With luck, I will simply shift gears and become more domestic for a little while.

This month I will cook and putter more. I will stay home as much as possible. I will dote on and pet my menfolk as much as they will allow. I will make a point of taking the dog for a walk in the brightest part of the day. When the real cold comes, I will fret about the chickens and the feral cats, and make warm meals for them. (A grain and veggie mash for the hens, a kibble and gravy mush for the felines.) Despite my resolution to not fuss over the holiday, I will probably decorate something with twinkle lights. I will listen to classic standards by the likes of Mel Tormé and Bing Crosby. I will watch White Christmas. Probably more than once. Because it features the incomparable song and dance man, Danny Kaye.

But I will also re-read Stephen King’s It, as I have done, during winter break, for the past 25 years. And, if I follow my pattern, I will spend more time in my closet-office, with the door closed, wearing my headphones, listening to Midnight Syndicate, writing about witches and ghosts, pretending it is whatever season my characters are living in.

Here in the blog, I might not write about haunts and horror as much, but my interests will remain skewed toward the mysterious and the magical. In that vein, let me point you to a wonderful web find: Edinburgh’s mysterious book sculptures. 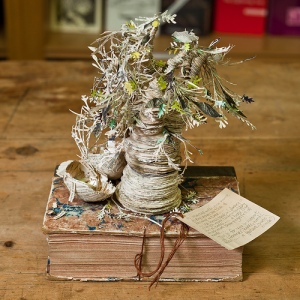 Watch a news clip about the sculptures HERE.

I’d recommend that you search the web yourself for more information. I poked around enough to learn that a total of ten sculptures were gifted to libraries in Edinburgh, and that the artist has indicated she is female. I don’t really want to know any more than that – I prefer that some mystery remains.