Recently, a concerned reader contacted me via my Facebook page. She wanted to discuss a sensation of being watched or followed she has experienced while working on the grounds of a local wildlife management park, as well as her confusion about why she is able to sense anything. Our conversation intrigued me, so I’ve done some preliminary research about the site and its history. I’m discovering multiple factors which may be contributing to the unsettling atmosphere of the region.

I’m learning enough, in fact, to know I will need to break my investigative progress into several parts. I hope to share my results on Fridays, throughout the spring. I will always notify readers of a new segment by sharing the link to Facebook, Twitter and G+. I will also add two-way links to each installment as it goes up here at the blog.

For today’s installment, I’ll share the message thread that inspired me to start digging, and some basic first facts about the history of the place.

“Carlos Avery Game Farm” by Bobak Ha’Eri – Own work.
Licensed under CC BY 3.0 via Wikimedia Commons.

The following instant messaging thread has been edited for length and clarity, and to obscure any personally identifying information ‘Rebecca’ provided during our conversation.

Rebecca
March 26th, 3:33pm
I am new to the area and we own a towing company. We have been called out to the Carlos Avery Wildlife Management Area several times for different things. Every time we go there, I always feel as though we are being watched and/or followed by some unknown presence. I have tried to do some research on the wildlife refuge, but unfortunately am unable to find much. I have, however, discovered that a little boy was murdered back in there, which is sad. I am truly just wondering if there is any other info out there that would help me understand the feelings I get. Thanks.

The Paranormalist – Renae Rude
Mar 26th, 4:59pm
I’m not surprised by the experiences you’ve had in Carlos Avery. I haven’t done any intensive research about the place, but my family has all sorts of stories about things that happened there … mostly about gangsters during prohibition. I’m glad you brought it up. Maybe that will become my spring project. … I’d be interested to learn if there’s any particular place or time where you’ve noticed a strong sense of being watched.

Rebecca
Mar 26th, 5:03pm
Yes I could help you in your project. I’m not saying I have a sixth sense or anything, but it’s like I can feel, and almost see, what it is that is bothering me. Can’t explain it and no one believes me.

Rebecca
Mar 26th, 5:16pm
I would like to know if I do have a special ability and how to control it. One night, in a home where we lived, my fiance was unsure about why I was uncomfortable. Then he started to try to understand, and was able to feel what I felt by touching me. That night was one of the worst nights on the property, and we moved shortly after. Sorry for bothering you, but I just wonder if there is something wrong with me or if all of this is just a gift, so to speak.

The Paranormalist – Renae Rude
Mar 26th, 11:29pm
I think it’s always best to pay attention to and obey one’s instincts. [Note: I’ve clipped a few sentences of my response from this thread and moved them down to the “WHAT’S NEXT” section of this post. You’ll see why when you get there.] Your experience with your fiance is familiar to me. My husband is less open than I am to sensing the mood around him, but he can “catch” what I’m feeling if he tries. I doubt there’s anything wrong with you. And it doesn’t matter if anyone believes you. Only you know how you feel in certain situations, and only you can determine your own belief about why you feel that way. Personally, I enjoy feeling like I might be tapped into the history of a place. (And if the “vibes” are bad, I’m outta there.)

The Paranormalist – Renae Rude
Mar 26th, 11:34pm
Oops. I didn’t mean to hit enter yet, but I am pretty much done. I suspect there are lots of folks out there who are wondering some of the same things you are. May I use the text of our correspondence in a blog post? You can be anonymous or choose a name that conceals your identity.

Rebecca
Mar 27th, 8:11am
Sure, you can use our conversation. Just use my first name, but not my last. And yes, if it is anything bad, I do feel I need to get out as well. The same goes with the town where I live. [Note: The town Rebecca named here borders portions of the WMA.] There are areas within the town where I sense different things. I guess it is what it is. It’s all in what one’s individual take is on things, I suppose. I just may be a little extra sensitive. We did a tow for someone who lives on the edge of the Carlos Avery, and who is surrounded by the wood line. I didn’t have to say anything at all and this person just started talking about the spiritual activity they have experienced. Creepy, but yet I knew already.

That is where Rebecca and I left off. The next day I went to the Anoka County History Center and began my research.

The Child Murder:
Rebecca is correct about a boy being killed in the sanctuary. He was six years old. The murder happened in 1980, but the saga of the perpetrator’s insanity actually began in 1965-66. (Most of that story happens well outside the boundaries of the wildlife preserve, but it’s chilling.)

The Fugitive Hunt:
I discovered that I was wrong about the history of the park including “gangsters during prohibition.” In fact, the gangster incident occurred in 1957.

The Camps:
Now, in 2015, the property is more than 23,000 acres, with 4,500 acres classified as a wildlife refuge and closed to all trespassing. The habitat is a mix of open water grasslands, marsh, and oak woods.

The property has been in production since since the 19th century. First it was logged out, like most of Minnesota’s wilderness, then a carpet company bought the land to harvest its wire grass for the making of rugs, then the state government took over and established a game farm. To make each of these endeavors possible, camps of workers were required.

Territorial Conflicts:
I’ve not found reference to any major battles within the boundaries of the Wildlife Management Area, but the history of the wider area is dense with territorial conflicts. Minnesota did not achieve statehood until 1858. From the 17th century forward, however, the wilderness was being harvested of its furs for French and British traders. During this time it was common practice for the traders to intermarry with the indigenous people, and so a new “race,” known as the  Métis, developed. In the mid-18th century, territorial conflicts between the Dakota Sioux and the more recently arrived East Coast tribe, the Ojibwe intensified. Battles between the two tribes continued for a more than a hundred years.

I’ll share the local urban legends and spooky stories that are associated with the Carlos Avery Wildlife Management Area in particular, and the surrounding counties in general.  I’ll organize the historical information I’m finding, and attempt to determine the origins of the urban legends. (I foresee several more trips to local historical libraries and sites.) I hope to have more conversations with Rebecca, and–perhaps–others who have had unusual experiences in or near Carlos Avery. Of course, I’ll be going out to to the property–probably repeatedly–to explore, take pictures and experience the atmosphere of the place.

My purpose for conducting this investigation is best expressed by a passage I originally wrote within the conversation I shared with Rebecca. I’ve clipped and moved it to this spot, so that you can understand why I’m doing what I’m doing. I wrote:

I suspect that most of us have some degree of sensitivity to the echoes that linger in certain places. (And some of us are just naturally inclined to pay attention to our environments.) I don’t know what those echoes are. For lack of a better word, most of us think of such places as haunted. I suppose we each have to develop our own opinion about what it is we are sensing. I’m interested in the haunted-place experience itself, more than the cause. (I don’t attempt to either prove or debunk hauntings. I don’t think it’s possible to do so. I also have zero interest in trying to interfere with or change whatever is going on. It’s not my place to “send anyone into the light.”)

My plan is to go where the research leads me, and to report my findings here, in future blog posts.

I hope you’ll come along for the ride.

Interview with Hunter Shea: on THE WAITING and the true-life ghost-story that inspired the novella. 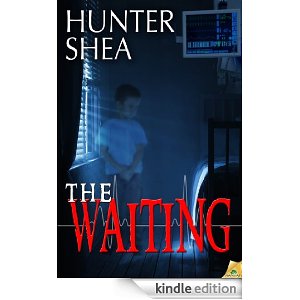 As promised (and just under the wire) I present part one of my interview with Hunter Shea. This segment focuses on his latest release, the novella THE WAITING … and the true-life experiences of the author which inspired the ghost story.

Grab a favorite beverage (we chose to drink pale ale during the interview) and join us for the next 17 minutes or so. Then hit us with any questions or comments you have below.

By the way, we managed to not spoil the book’s ending, so don’t worry if you haven’t read it yet.

The Waiting is available for instant download, for just $2.66 right now, on Amazon.

A short ‘NetNet this week (which is better than none, right?) I seem to have injured my right wrist / forearm and working on the computer, and scrolling in particular HURTS. I’m pretty much taking a few days away from the PC. Happy Easter weekend everybody.

DON’T FORGET TO ENTER TO WIN A FREE  DIGITAL BOOK, OR AUTOGRAPHED PAPERBACK, BY HUNTER SHEA . YOUR DEADLINE IS 11:59pm TONIGHT 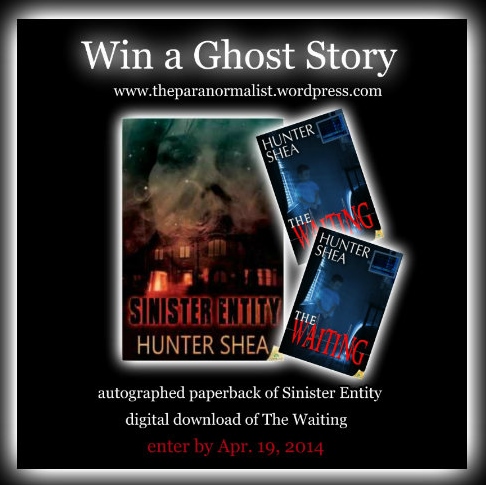 The tour has been going well, form what I can see.  To find links to all the tour’s stops, visit Hunter’s launch post at his website, huntershea.com. 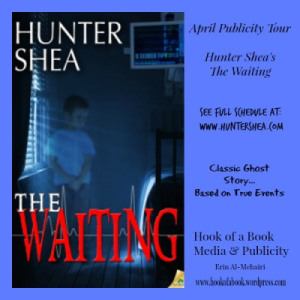 In order to enter the drawing, please click below to be taken to The Paranormalist Portal.

Once there, you will find a widget that allows you to earn chances (think of them as raffle tickets) by completing simple actions that will support Hunter. Tasks that can earn entries for you range from following him on Twitter to purchasing and reviewing any of his books. (THAT sort of behavior, will get you multiple entries, of course :))

Once you’re done there, there will be an easy link to come back here, so you can continue reading this week’s NetNet.

GET SWEPT UP IN MUSINGS ON VAN GOGH & HEMMINGWAY

Ray has been participating in an A-Z challenge over at his place, and has chosen the theme of art. I’ve enjoyed the whole series so far, and learned a fair bit. This is my my favorite so far: 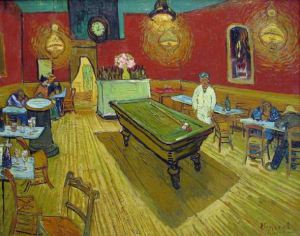 From Ray Yanek at Writing the Rails: N is for … (the Night Cafe)

British Pathé, has uploaded 85,000 historic films to YouTube. Read more about the project at The Telegraph.

The folks over at Mysterious Times brought this to my attention. If you aren’t subscribed to this site that frequently shares historical and paranormal links and tidbits, you ought to be.

There is no way I’m going to capture every great thing that happens in my personal web, let alone on the wider internet. The posts I feature here just happened to catch my eye. They resonated with me and whatever is going on in my life right now. And they are worth sharing.