Regular readers know that my creative and talented daughter has an Etsy shop where she sells original designs on 1″ collectible buttons.

BTW, a one inch button is about the size of a quarter. Thanks to the movie Office Space, many of us think of these little gems as “flair.”

The magnets can be used to decorate any metal surface, of course, but they can ALSO can be worn in a pendant (which Pooka Creations sells.) Here’s a video I made about it a couple of years ago, that shows how it works. (I think all the designs shown in the video are still available.)

Does that look familiar? She chose this year’s design in honor of my cross stitch project.

At the Pooka Creations shop, My girl describes the intent behind these buttons, and why she began to make them. Here’s an excerpt:

On Halloween 2013, I went through neighborhoods looking for thirteen houses that had decorated fabulously and were handing out candy to kids. I gifted each of those houses with a special “Halloween Hero” button I had made just for the occasion, and I thanked each of them for keeping my favorite holiday alive and well. I thought others may enjoy collecting these designs for themselves, or may want to hand them out to awesome Halloween Heroes in their own neighborhoods. 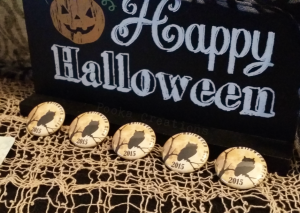 Now seems a fine time for me to share a selection of my daughter’s Halloween-appropriate wares. There’s plenty of time for you to order some as tokens for the Halloween Heros you know, or to choose some favorites, from all of her designs, to be special hand-outs on Halloween night.

Aside from the designs shown in the video, here are a few that I think are especially appropriate for the folks who find their way to this blog:

Then there’s the special things:

… and this REALLY special thing:

This post-apocalyptic styled necklace is the first piece she’s offered that branches away from her beloved buttons.

(… Well, the SECOND piece, really, because the first one already sold.)

Clicking on any of the stand-alone images in this post will whisk you to Pooka Creations,

where you can browse through even more designs and place your order.

Otherwise, click the following link to go to the shop’s main page.

Jason (The Beau) on Jason Voorhees. (A peek at my “normal” life.)

So it’s Wild Card Wednesday again. Tonight I’m bringing a glimpse of my “normal” life to you. The following (heavily edited) Facebook post is from my personal, non-paranormalist, FB page. The Jason who features so prominently in the thread is my daughter’s significant other. (You know her as Pooka, purveyor of fine buttons.) 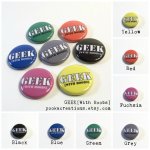 I’ve often referred to Jason as “The Beau” here at the blog.

Courting Creepy: 13 crucial movies – for zombie lovers – at Halloween (or anytime.) By Jason.

and, more recently, in:

I suppose he shows up here at the blog more often than my blood family because we share a love of the horror genre. (Though he’s a little darker than me.)

When the conversation happened, I was deeply amused. Now that I’ve got this “Wild Card” thing going on, I have an appropriate slot for sharing it. 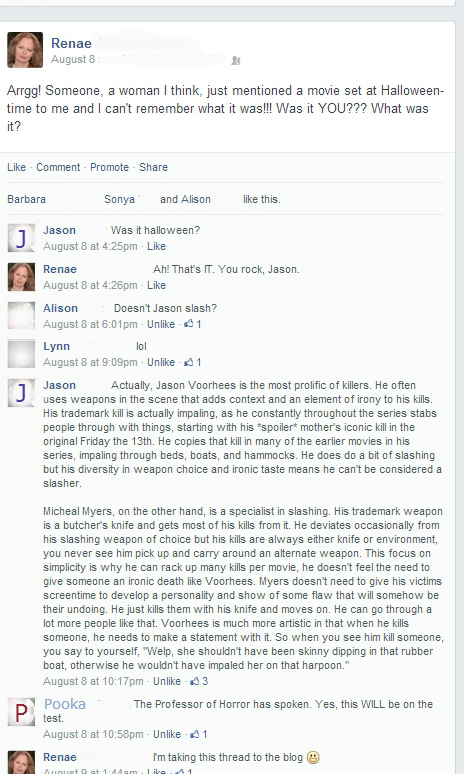 I’ve got to say one thing about the women in our family, we have excellent taste in men, if what you want is brilliant and snarky.

The 10 best not-horror, not-scary books by Stephen King. (Plus two you should read even though they are scary.)

Against all odds, several of my regular readers are NOT horror fans. (And I live with another horror avoider too.) I think it’s a shame that these folks have been deprived of the experience of reading Stephen (the) King  just because of his scary reputation for writing only in the horror genre.

For my contribution to this week’s fourth (and final?) King’s March link-up (a Stephen King-themed blog hop) I’ve decided to reach out to such people with a list of 10 great reads for fans of good writing, as long as it’s not considered to be in the horror genre. These books will neither gross anyone out, nor cause nightmares (probably.)

The author here is Stephen King, though, so be prepared for the stories to bring up some strong emotions. The surprise – for non-King readers – will be that those emotions may include wonder, amusement, tenderness, admiration, hope, nostalgia, awe, wistfulness, and joy.

They call death row at Cold Mountain Penitentiary “The Green Mile.” John Coffey, sentenced to die for the rape and murder of two young girls, is the latest addition to the Mile. Paul Edgecomb, the ward superintendent, discovers that there is more to John Coffey than meets the eye, for this friendly giant has the power to heal.

Suspected of killing Vera Donovan, her wealthy employer, Dolores Claiborne tells police the story of her life, harkening back to her disintegrating marriage and the suspicious death of her violent husband, Joe St. George, thirty years earlier. Dolores also tells of Vera’s physical and mental decline and of her loyalty to an employer who has become emotionally demanding in recent years.

After realizing his romantic life is not going in the direction he’d hoped, Devin Jones decides to take a summer job at an amusement park. There he makes friends with Tom Kennedy and Erin Cook, also summer hires at Joyland, which years before had been the scene of the murder of a young woman named Linda Gray whose ghost is said to be seen at the Horror House. He also befriends a young boy, named Mike Ross and his mother, Annie. Their lives all become entwined when Devin decides to investigate the mystery of Linda Gray’s unsolved murder by the “Carny Killer.”

Jake Epping is a thirty-five-year-old high school English teacher in Lisbon Falls, Maine, who makes extra money teaching adults in the GED program. He receives an essay from one of the students—a gruesome, harrowing first person story about the night 50 years ago when Harry Dunning’s father came home and killed his mother, his sister, and his brother with a hammer. Harry escaped with a smashed leg, as evidenced by his crooked walk.

Not much later, Jake’s friend Al, who runs the local diner, divulges a secret: his storeroom is a portal to 1958. He enlists Jake on an insane—and insanely possible—mission to try to prevent the Kennedy assassination. So begins Jake’s new life as George Amberson and his new world of Elvis and JFK, of big American cars and sock hops, of a troubled loner named Lee Harvey Oswald and a beautiful high school librarian named Sadie Dunhill, who becomes the love of Jake’s life—a life that transgresses all the normal rules of time.

Vince Teague and Dave Bowie are the sole operators of The Weekly Islander, a small Maine newspaper.  Stephanie McCann has been working for them as an intern.   When Stephanie asks if they’ve ever come across a real unexplained mystery in the fifty years they’d been publishing the paper, they tell her the story of The Colorado Kid.

The Eyes of the Dragon

Once upon a time, in the Kingdom of Delain, King Roland is murdered and his son and heir, Peter, is framed for the crime. Peter and his loyal friends must battle an evil wizard and Peter’s usurper brother, Thomas, for the throne. Imprisoned in a tower, Peter conceives an escape plan that will take him years to execute before taking on Flagg, the powerful sorcerer who has masterminded this coup.

The Girl Who Loved Tom Gordon

Nine-year-old Trisha McFarland strays from the path while she and her recently divorced mother and brother take a hike along a branch of the Appalachian Trail. Lost for days, wandering farther and farther astray, Trisha has only her portable radio for comfort. A huge fan of Tom Gordon, a Boston Red Sox relief pitcher, she listens to baseball games and fantasizes that her hero will save her. Nature isn’t her only adversary, though – something dangerous may be tracking Trisha through the dark woods.

The Department of Scientific Intelligence (aka “The Shop”) never anticipated that two participants in their research program would marry and have a child. Charlie McGee inherited pyrokinetic powers from her parents, who had been given a low-grade hallucinogen called “Lot Six” while at college. Now the government is trying to capture young Charlie and harness her powerful firestarting skills as a weapon.

— IF you read only ‘Rita Hayworth and the Shawshank Redemption’ and ‘The Body’.

I’ll skip the synopses here, because we pretty much all know the basic stories, thanks to the movies Stand By Me and The Shawshank Redemption.

On Writing is both a textbook for writers and a memoir of Stephen’s life and will, thus, appeal even to those who are not aspiring writers. If you’ve always wondered what led Steve to become a writer and how he came to be the success he is today, this will answer those questions.

ALL THAT SAID, FANS OF GREAT STORIES – HORROR OR NOT – MUST READ IT AND THE STAND, EVEN THOUGH THEY ARE SCARY. 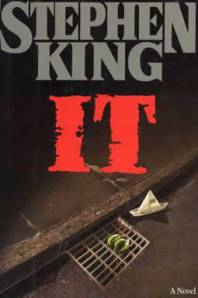 A promise made twenty-eight years ago calls seven adults to reunite in Derry, Maine, where as teenagers they battled an evil creature that preyed on the city’s children. Unsure that their Losers Club had vanquished the creature all those years ago, the seven had vowed to return to Derry if IT should ever reappear. Now, children are being murdered again and their repressed memories of that summer return as they prepare to do battle with the monster lurking in Derry’s sewers once more. 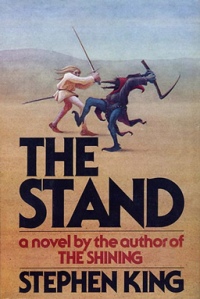 One man escapes from a biological weapon facility after an accident, carrying with him the deadly virus known as Captain Tripps, a rapidly mutating flu that – in the ensuing weeks – wipes out most of the world’s population. In the aftermath, survivors choose between following an elderly black woman to Boulder or the dark man, Randall Flagg, who has set up his command post in Las Vegas. The two factions prepare for a confrontation between the forces of good and evil.

NOTE: All the synopses and book jacket images above were obtained directly from stephenking.com.

ON THE TOPIC OF THIS BLOG HOP / LINKY:

I’ve really learned a lot from participating in this blog hop / linky, and I feel like I understand how such things work MUCH better now.

Click the pic to go to this week’s link up.

Wensend &  Fourth Street Review (the hosts of this linky) have each posted summaries and links to the week-3 posts, and the final linky sign-up gadget.

Just click either of those links you just saw to see what other bloggers have been writing about recently. (Interestingly, some of the participants are not horror fan and do not enjoy a scary read. I did not expect that when I signed up, but it’s been interesting how they handle the Stephen King theme.)

My own previous entries include:

The wisdom of Stephen King: best quotes from Constant Writer.