And now a tiger salamander:

I’ve been on a change-everything-in-my-life kick lately.

It’s been good. I went in for a long over-due check-up and got a clean bill of health. I took a look at my priorities and goals and made some real changes. I’m writing more and taking better care of myself. Pages are piling up. I’ve lost 12 pounds in 6 weeks.

I quit my job at the Paranormal Hotel. Okay, I sorta-kinda quit. I tried to make a clean break of it, but ended up agreeing to fill in for vacations and sick days and stuff … when I can. I suffer from some sort of twisted addiction to the place, I think. (I’m already scheduled for a long weekend in early May.)

I also started volunteering at our local nature center.

That chubby little guy up there is my new friend, Right-Side Salamander, aka The Fat One. (These are my names for him. The rest of the feeder-people don’t seem to make much of a distinction between the two.) Please forgive my filthy fingers … the salamanders need to have their soil loosened and moistened thoroughly, and the trowel is just unnecessarily awkward. I promise I wash very well after tending to my new buddies. (There are others critters I take care of as well. You’ll probably get pictures of them at some point in the future.)

I have been working on the blog too … you just can’t see any of that yet. I’ll give you a sneak peek of one upcoming feature though:

Yep. It’s going to get its own section. (That link doesn’t lead to a public page yet, btw.)

… And that’s the end of tonight’s out-of-the-blue post. I just wanted to let you all know I haven’t died or anything, and that I’ll be back soon.

Perfectionism is the enemy of productivity. Thus, you get a hummingbird moth post.

This is a hummingbird moth. Well, to be accurate, it’s a snowberry clearwing moth (Hemaris diffinis) which looks more like a very large bumblebee than a hummingbird. 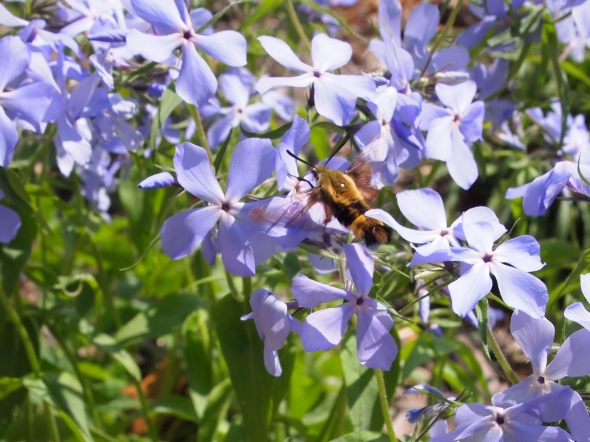 Before I muse on my encounter with this insect, though, I want to explain the title of this post.

Lately, I’ve been pretty consistent about adding a quick, nightly snippet to my Facebook page, even as I’ve let this blog mostly languish. Almost every evening, I think: This could be expanded into a full post. Then I decide that whatever I’m writing about isn’t quite right for the blog. It’s not creepy enough. Or clever enough. Or well-researched enough. Sometimes my thought is simply: No. I’m too tired to put that much time into writing tonight.

I write slow. Every line of text that makes it to the page has been rewritten a half-dozen times. (Curse the convenience of the backspace button.) Here’s a confession: those “quick” Facebook snippets of mine actually require an hour or more. Mostly because there’s always a slightly better way to express a thought.

Then there are the projects for the blog that never seen to come to completion – I’m embroiled in at least three which I intend to write about … as soon as I finish them.

An example? Back on April 17th, I set myself the task of reviewing, sorting and categorizing films based on the works of Stephen King. There’s a hell of a lot of them, however, and I’m having a problem figuring out where to draw the line. Do made-for-TV movies count? Well, they have to, thanks to The Stand, It and Bag of Bones – all of which I have strong opinions about. And what about the short films?

When my daughter, Pooka, was home for a visit, she accidentally reminded me of what I meant to do back when I started this blog. Somehow – perhaps because I’ve since watched too many ghost hunter shows – I had become fixated on finding a reputedly haunted location to investigate in the customary manner, but that is not what I set out to do. In fact, I wanted to do the reverse – I wanted to closely observe places that inspire in me a sense of mystery, melancholy or dread, and write about that experience. The gadgets and tools were meant to be secondary, a way to quantify any phenomena (natural or supernatural) that contribute to an evocative atmosphere. It took my daughter’s insight to show me that I had gotten caught up in a strange set of ghost hunter rules that I felt ill-equipped to abide by. She helped me remember that I have always been less concerned with finding a ghost than with exploring the sensation of being haunted.

I haven’t been writing it. I haven’t been editing it. I haven’t even read any of it in more than a month. I can hardly remember what it felt like to really work with it. I know there were weeks at a time when I wrote fast and hard – come hell or typographical errors – while generating the bulk of my novel. Forcing myself forward felt awful, but pages chugged out of the printer and the manuscript stack thickened every day. Then I started editing the draft, even though I hadn’t finished writing the story. I think that’s when I first veered off the path.

To be fair to myself, I did okay for a while even after I switched to editing. Then my life blew up (for the fifth or sixth time in the last four years) and I lost sight of the path entirely. But I digress.

It’s time to renew my battle with perfectionism. I have to start writing again – not editing, writing. I don’t know exactly what that means yet, but I suspect that letting the blog posts come when they want to is part of it … even when my inner critic says, “No, that topic is not right enough.”

Which brings me back to the hummingbird moth.

My children and I were visiting the nature center in my new hometown. It has the most amazing play area any of us has ever seen – in this case, a photograph will illustrate better than words: 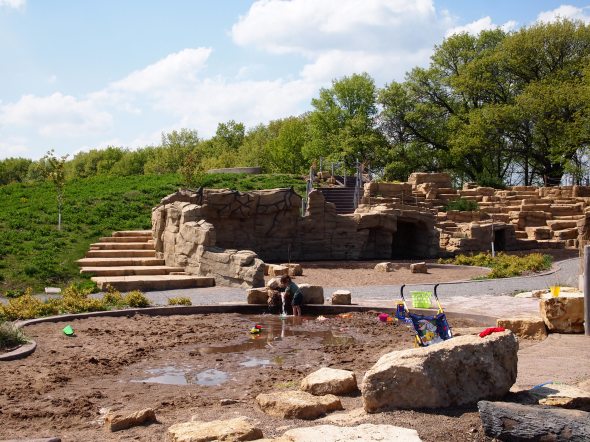 Yes, there are manufactured caves and rocks to climb on. That muddy patch in the foreground hints at the center’s most brilliant feature: an artificial stream that allows children to slap a rock to make water gush forth and run along the bed. On this day, there were only a couple of preschoolers playing, so the stream wasn’t very full … until my children arrived. (They are 16 and 26, by the way.) They not only filled that stream, they also diverted its flow with a dam. (No, they did not interfere with the little ones; they used the empty end of the stream and dismantled the dam when they were done.)

Then we noticed an insect – something that looked like a giant bee – buzzing in a nearby flower patch. It didn’t take us long to rule out every species any of us had ever seen. We marveled. We snapped pictures. We moved on.

Later, after we used the internet to identify the insect as a hummingbird moth, and after everyone had gone to bed, I sat on the deck in the dark, listening to a lone alien amphibian calling from the pond below me. (I can identify at least six frogs and toads by their calls. This call was similar to an American Toad but different. Perhaps it was just a particularly large specimen, or one that had some sort of mutation.)

I’ve lived in Minnesota all my life, and spent countless hours outdoors. I’ve grown whole gardens to attract wildlife to observe. I’ve done nature studies in swamps, forests and meadows. I consider myself pretty well-informed about the native fauna of my region. How is it possible, then, that I encountered two unknown (to me) species, in one day, when I wasn’t even looking for them?

Granted, moths and toads are small creatures, which can easily escape notice. But they make me wonder what else is out there that I don’t know about. I keep thinking that all of my outdoor time has been spent in, or very near, well-settled areas.

Suddenly I find myself reconsidering what might be lurking in the Northern Minnesota woods.

*”In Minnesota there are approximately 16.3 million acres of forest land, of which 14.9 million acres are classified as “timberland” or lands capable of producing timber. A geographical depiction of forest land location can be seen on the map. An additional 960,000 acres are not included in productive timberland due to their inclusion in the Boundary Waters Canoe Area Wilderness or other reserved land category.”