← Relaxed in an endless autumn.
BFQ Diary #2: Something Old and Something New →

So the month of NaNoWriMo has passed. I did not write 50,000 words in November. Worse yet, I did not finish a complete rough draft of a novel in autumn, which was my actual goal. (Otherwise known as my Boss-Fight Quest, as you may recall.) Assuredly, by these metrics, I have failed.

I am writing again. I have figured out how to find the time and energy I need to make words happen, even as I continue to settle into my life in North Carolina.

During the month of November, I pretty much set aside everything I deemed negotiable — things like housekeeping and social media maintenance, for example — in favor of a new approach. I split my waking time into thirds, as follows: 1/3 taking care of my self and my loved ones, 1/3 having fun and relaxing, and 1/3 working on the novel. (Plus, I’ve been sleeping regularly … up to eight hours at a time!) This approach worked. (Even if it didn’t lead to prodigious, NaNoWriMo-style output.)

This autumn, I helped my daughter sell her buttons at a couple of events, including the Raleigh Pagan Pride Festival. Our family picked out, and are preparing for, a puppy who will come home to us in a three weeks. I went to the NC State Fair. (That was a two-for. Both fun and work, because I wanted to do some research for the novel setting.) And now plans are underway to have a real Christmas, for the first time in years. 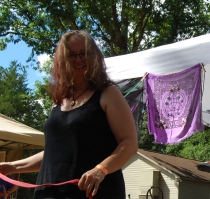 Yeah. My hair likes to frizz in the humidity down here. Who knew? 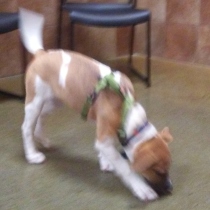 This is Bouncer. She’s wiggly, so forgive the blur please. 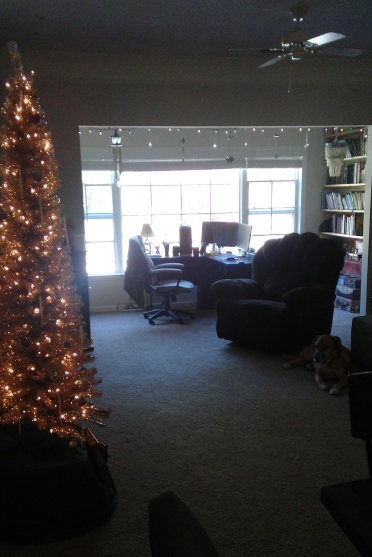 The retro Christmas tree of my dreams 🙂 (My children are taken aback, but tolerant.)

I also wrote about a third of a novel. (One that is shaping up pretty damn well, I think.)

In these last few days of fall, 2016, I feel balanced and healthy. My relationships are happy. My home environment is … fine. (Better than fine, really. Even good. Just not immaculate.)

So. As the “winter” season begins, I’m going to stay with this plan. I’ll have to make few tweaks of course. I am going to have to dust, sooner or later. And, as usual, I’m resolving to being more faithful to the blog and my other social media connections. I hope to do some on-topic posts in coming weeks, but for now I’ll settle for checking in with you and sharing a bit of what I wrote in autumn.

I hope you are all well, and living the lives you want to live.

P.S. Please remember, this is from a first draft.

Excerpt from ‘the carnival novel’. (As it is currently known.)

The wind lifted the hair off his hot nape, bringing with it a fresh burst of his prey’s scent. Under layers of sweet and powdery perfumes, the animal smell — the betaille smell — of her was dank. She reeked of long-dried excretions, of gently rotting teeth, of pinprick wounds now scabbed over.

For more than an hour, she’d been posing off to the side of midway traffic, smoking cigarettes, making herself available. Despite the sultry evening, she was wearing a jacket with long sleeves and many pockets. All the better to hide a pharmacy, he thought, scowling. Below the hem of the coat, a few inches of denim-clad thigh showed above tall boots. Best to cover up as much scarred and pasty skin as possible, eh Chère? He noted the boots were flats. She’d be able to run.

The night was loud with the sounds of the carnival, but it was no trouble for him to sift through the noise and hear the patter she directed at teenagers as they passed. “I love your skirt,” she’d call out. Or “Hey, where’d you get that foot long?” If the marks engaged with her, she’d chat some, maybe offer a cigarette, before asking, “Looking to get hooked up?” Or, “Need some party supplies?”

The kids couldn’t see the sloven woman — the salope — beneath her fresh-from-the-mall clothing. A shoplifter too, yeah. They couldn’t see the underside of her shiny, long, false nails were crusted with dirt and food and flakes of skin. To them she was a girl, like them, except a bit more edgy. Just a pretty pichouette, in a fashionably distressed jacket, offering to sell them a little fun.

Maybe if she only peddled the mari, he would leave her be. True, she was stealing money better spent on the carnival’s attractions, but about that he could look the other way. After all, some of her marks had come to the carnival only to score their pot. Whatever dollars were spent on the midway by such as them was a windfall, a side effect of the “munchies” her herb inspired. If mari were all she sold, he could forgive the trespass. Mais non, this one sold all the poisons, all the pills and powders and rocks. And some of the children she pitched were so young they had yet to grow hair under their clothes.

Now she was selling capsules, each a one, to a trio of muscular young men wearing matching jerseys. The were laughing and posturing for her, daring her to come ride the Freefall with them. He tensed as she looked up at the blazing neon tower they pointed at, worried she might slip away from him, escorted by the fortuitous herd of near-innocents.

His shoulders relaxed when she put them off, telling them to come back around for her later, making sure to touch each boy as she made her excuses. Was she a putain too? If so she was spoiled meat. He could smell her sickness from where he crouched.

Finally the pack of boys left her. As soon as they turned away, her flirtatious pout fled her face and she licked her thin lips. With narrow, feral eyes she looked up and down the strip. Assured that no one was paying attention to her, she turned her back to the flow of people and swiftly organized the cash the boys had pressed into her hands. She tucked a single bill deep into her front pocket then slipped the rest down the front of her pants, careful to snug the wad up against her crotch.

She looked up suddenly, a stray chienne who’d caught an alarming odor. She peered into the darkness, trying to decide if there was something or someone to fear between the generators he was using as cover. He held his ground, motionless. If her human vision was better, she would have made direct eye contact with him, but to her there could be nothing more than a glint of reddish light reflecting from his eyes. Spooked even so, she backed out into the traffic behind her, then allowed the stream to carry her eastward. She glanced back to her squatter’s territory twice before the crowd swallowed her. Trust one predator to know when another was around.

Staying to the alleys, he kept pace with her as she strolled along the midway, not always bothering to keep her in his sight; he would not lose her trace now. He contented himself with occasional glimpses of her long blond ponytail and that jacket. Within five minutes, with the invisible pressure of him muted by distance, she had stopped checking over her shoulder.

He drew close again when she paused to buy a lemonade and a pretzel. A local boy, temporarily hired to work behind the counter, was just as vulnerable to her surface beauty as any mark. But — he was pleased to see — his cousin Salvatore’s son, who was running the booth tonight, was not fooled. His face twitched in disgust when he caught a whiff of her. When the local went to pump extra cheese into a second cup for her, T-Salvatore stopped his hand with a disapproving glare that forbid the lagniappe.

She moved on. By the time she dropped her plastic lemonade cup into a garbage can, her loose-hipped, easy saunter told him that she was feeling confident again. He wondered if she’d circle back to the corner where he’d discovered her or choose a new location to hawk her wares.

Instead of doing either, she made her way to a bank of portable toilets that lined the eastern edge of the fairgrounds. There was no crowd here, where there was nothing bright and flashy to make one linger, but plenty of stink to hurry one away. She moved toward the end of the line, where strung up lights did little more than blunt the darkness pressing in from the rough fields around the fairgrounds. To the north, beyond the fields, on the far horizon, was a black line of timber. A welcome breeze wafted the clean, wild scent of pines to him as he watched the girl check three boxes, before she chose to go into the second from last. He smiled.