The Minnesota dentist who killed Cecil the Lion broke something in me and I have questions.

I posted the following piece earlier today on my personal Facebook. After further thought, despite its disconnection from my usual subjects, I decided to bring it here. I am aware that I could lose readers over this, but I ask that if you are offended, will you take a moment to try to help me understand before you go?

Here’s what I wrote, words in italics were not in the original FB post:

Is my [Facebook] feed especially thick with posts about the dentist who killed the lion, compared to yours? (Because I live in Minnesota, maybe?) Has this gone incredibly viral everywhere?

This thing is making me feel sick. I don’t appreciate sport hunting. I especially hate trophy hunting. I have an instant and immediate distrust of anyone who thinks killing animals is some kind of entertainment, or a way to prove prowess.

I eat meat. When it comes to killing for food, I lobby for comfortable, “natural,” humane living conditions and swift, efficient, painless kills. I do think that non-hunters / non-farmers / non-butchers (including me) have it too easy and are fortunate to live in a world where others are willing to harvest meat for us.

I think the dentist is a horrible person. I would never befriend someone like him, nor finance his hunts by patronizing his business.

I am disturbed by the internet’s response to his actions … or rather to him getting caught and outed for his actions. The collective is taking an awful lot of blood-thirsty glee in “hunting” him. His business, his name, his address and his telephone number have been widely distributed across the web. I keep seeing words like retribution, revenge, punishment, etc. The comments people are leaving for and about him are vicious.

How are we going to feel if someone kills him? And how do we feel right now about destroying his life? He has children and a wife. He must have friends. How is annihilating this one family making anything better?

What, exactly are we doing here? I think it’s likely that the guy didn’t know that he was going to shoot a beloved celebrity lion who was wearing a tracking collar … which is really the only reason we know what he’s done. I have to assume he thought this was a legal hunt … demented and sad, but legal. So in a weird way this was an accident.

Folks who focus on THAT part of this mess (the celebrity lion, the bad hunting practices, the missed shot) aren’t swaying any of the current or potential trophy hunters out there, because they all assume that they’d do it better.

When you take the bungling and the cheating out of the equation, and the sense of outrage that anyone dare be so self-indulgent as to spend $50,000 to shoot a rare animal in Africa, you are left with hunting vs non-hunting.

But most everyone who is commenting about this is very careful to draw a line of distinction between this $50,000 fiasco and “regular” hunting. That sets us up for a trophy-hunting vs meat-hunting showdown.

Here’s my problem: what meat-hunting is, for nearly all of middle class America, translates to this, “Of course I’ll eat it. And that makes it okay that what I really want is the thrill of the kill and a 10 point buck’s head in my living room.”

If you doubt me–if you think it’s about putting meat on the table–we could sit down and figure out the cost per pound of venison or bear, once licenses, and equipment are figured in.

I personally know people who hunt regularly. What they tell me is, “I love being outdoors and seeing the animals.”

[I apologize for the “fucking.” Not because I don’t swear like that, but because it injects more heat into my thoughts than I wanted to. I’m leaving it, though, because that IS what I said as I was figuring our what I wanted to say.]

Is it the camaraderie? Why can’t camping with your buddies be enough?

Is it the shooting? Why can’t that desire be satisfied by target-shooting, trap-shooting, trick-shooting?

Is it about running dogs (for bird hunting)? Why can’t that desire be satisfied by flyball trials, herding, agility coursing?

Is it about practicing and passing along survival skills that may become necessary if our society collapses? Do you understand that if our society collapses we’ll all be eating whatever we can catch and kill, with whatever tools we have at hand, and that it will have little to no relation to the kind of hunting that you do in season, with your guns and bows? [Fast birds, deer and bear are not likely to be options once the ammunition runs out.]

What I’m not hearing is an admission that there’s more to it. How much of the desire to hunt is about peer pressure, and tradition, and proving yourself? Why are you willing to yield to those kinds of pressure?

And if it’s not that stuff, than what is it inside you that wants to kill the animal personally?

That’s a serious question. I lack any desire to kill. To me, it’s a grim, unpleasant necessity sometimes. (Yes, I have intentionally killed small animals. I killed mice for snake food for some years. I’ve killed other animals to end their suffering.)

Hunting for anything other than needed food is pleasure hunting, just like what the dentist does. And I don’t get it.

If we are capable of hating this dentist so much, how is it that we regularly give Uncle Jack a pass for his annual deer hunting trip?

This is trivial, in some ways, compared to all the other ills of the world, except I have this creeping suspicion that it’s not. This overblown, sensational story is lightning in a bottle. This is about privilege and resentment. This is about the ability of a society to shape itself and to censure individuals who step out of line. This is about seeking understanding of the other side … or refusing to do that.

I’ve been trying to see and accept the other side my whole life. I have grown up in a state that approves of hunters. I have hunters in my family. I have friends who hunt.

I’m tired of the explanations for hunting that I’ve received.

What I see is a continuum that includes my duck hunting neighbors AND my lion-baiting neighbor. What is the difference? Why are we willing to crucify the dentist and accept the rest?”

PS: I was going to post some photos of hunters posing with their kills from Flickr’s Creative Commons, but doing that seems a little too similar to what the wider internet is doing to the dentist. My point would not have been to shame individuals, but to illustrate my biggest question to hunters:

Why are you smiling?

It’s a real question, not snark. I genuinely don’t understand.

And is there anything else you could do (like the activities I listed above) that could give you the positive feelings you get when you hunt? If so, why not do those things instead?

The owner came out of Cub to find me circling her vehicle, taking snapshots.

I told her I liked her car, and that I thought it was very personal.

“A while ago, I decided to get rid of almost all of my stuff. I wanted to have only what I really needed. I was ruthless with most things, but I kept one box full of mementos.

“For a time, I lived in this car, and I was crowed, but I kept my box of keepsakes in the trunk. One day, when I was staying at a wayside rest, I got the idea to make a peace sign on the hood with my marbles.

“Now all of the things I couldn’t get rid of are attached to the car.

“Eventually the car will die and I’ll have to junk it. That’s how I’ll let go of these final things.”

She also told me she’s spent a fortune on adhesives, and that something called ‘Marine Goop’ is the best.

I’m looking at my trusty Toyota Tacoma with speculation.

Our distant future, glimpsed through a door.

Busy week. We’re all coming off the bustle of a holiday weekend and, as I mentioned on Monday, my husband’s car was rear-ended on Sunday afternoon. I haven’t had much time to go out looking for photographic opportunities, so I took a little time tonight to tweak an existing photo into an image suitable for postaweek.

It just so happens that I took a lucky photograph the night before this week’s photo prompt — “door” — was announced. It was a pretty boring shot in reality, but I’ve cropped it and played with some filters to make it look more like the way I perceived it when I was inspired to snap the pic. 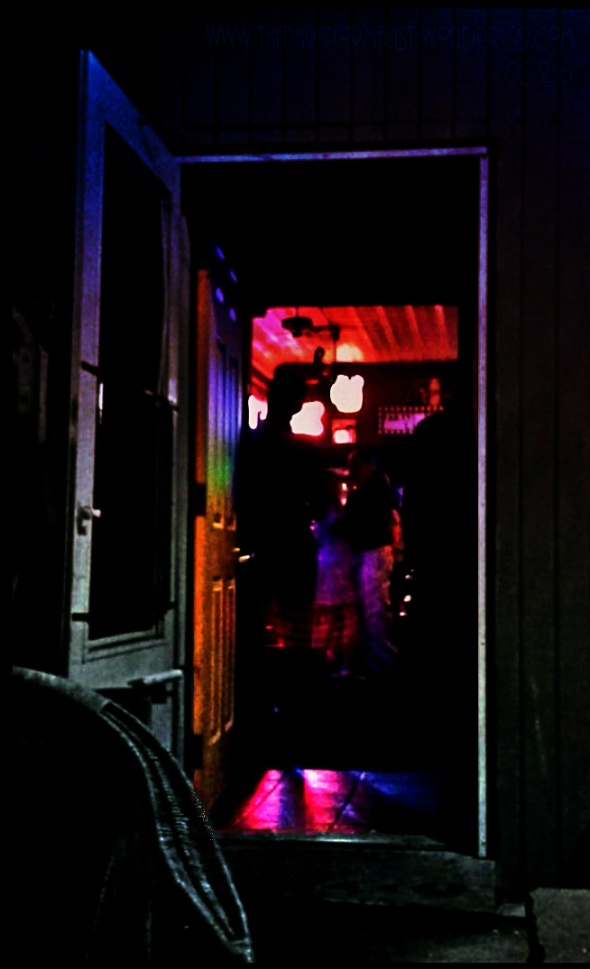 I love being on the patio of a bar or coffee shop, and I don’t usually pay much attention to whatever might be going on in the building, but on this particular night a really good blues band was playing inside. I tried to sort of translate the auditory glow that was pouring out into the evening by making both a black & white version and a color-saturated version, then merging the two.

This bar is called Hoolihan’s, and it’s just a neighborhood joint, located a couple of blocks off the main drag that runs through a pretty, historic town. It’s a bit run-down, even a little dive-y. They serve a lot of beer, strong single-pour drinks, and overpriced Heggie’s pizza, which they bake in what amounts to a large toaster oven. Most nights there is a local band. The regulars are friendly, middle-aged working folks, many of whom live within walking distance of the pub.

The upper floor of the building is an apartment.

Someday, when my husband retires, we want to own, operate and live in a place just like it.

Here are some of my favorite entries for the Door prompt  from others:

| No Naked Visitors | no prostitutes at this address | (I sense a theme here … or maybe these are the ones that are catching my eye because it’s late and I’m tired) | where does this one go? | Chitradurga Fort | Green Doors | the leper’s door | maybe I’d disappear if I stepped through it | Once There Was a Door | guess which city these doors are in | check out the light captured in the last one |  barn door | Abandoned and Forgotten | the window painter’s van | a scary door in a hotel (!) |