Sharp Was the River Bending by Jus Post Bellum

This week, I’m most excited about this: 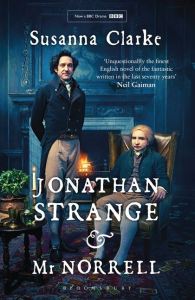 Will be available on Netflix streaming June 10th.
I’ve enthusiastically recommended this fantastic movie before, and now it’s coming to streaming. You have no excuses. 🙂
On IMDb here.

BBC AMERICA | Saturdays | 10/9c | Series premiere June 12th.
From the homepage:
“1806. England is beleaguered by the long war with Napoleon and centuries have passed since practical magicians faded into the nation’s past. However, scholars of this glorious history discover that one remains — the reclusive and skillful Mr Norrell (Marsan). His displays of magic soon thrill the nation. In London, he raises the beautiful Lady Pole (Englert) from the dead and summons an army of ghostly ships to terrify the French.”

UPDATE: I watched the first episode and set my DVR to record the next. I am intrigued by the story. The acting and settings are both appealing. My caution comes from two things: I’m not convinced by the special effects and I have trouble following some of the dialog because of the heavy accents of some of the characters. (The street magician / prophet, for example.) This is a personal failing. I can’t decipher “street” (cockney?) English very well.