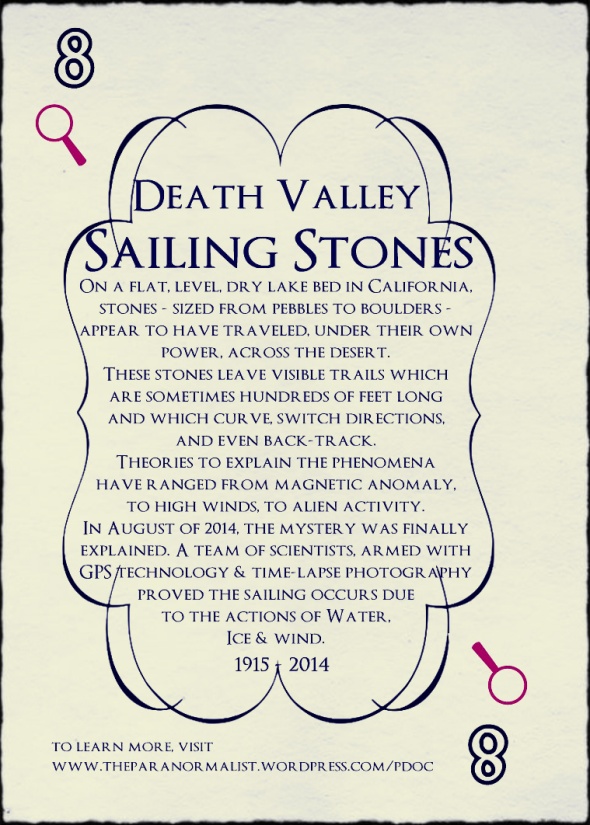 When I was formulating the idea for this PDOC series, I began by creating a list of 52+ potential topics which intrigue me. Then I divided them into four categories: creatures, psychopaths, haunts and mysteries.

I’m still trying to fill out the list of haunts that I want to explore, but I had no trouble immediately coming up with (more than) 13 mysteries. I always knew that the mysteries suit would be my catch-all for things that didn’t fit neatly into any of the other categories. I also knew it was likely to be my favorite suit. I am fascinated by odd occurrences, strange places and perplexing objects.

In my initial brainstorming stage, one of the first things I jotted down was the Sailing Stone of Death Valley. At the time, I did not expect the phenomena would be definitively explained before I could even write about it.

To be honest, I’m not sure how I feel about this. I certainly did not plan for this project to be about debunking, dismissing, or solving my beloved mysteries.  Like many of you, I enjoy knowing that I can’t know everything. I appreciate being wonder-struck and baffled. But I also like to learn new facts and gain increased understanding of how the world works.

So I guess it’s all good.

If you’re tapped into the same (or similar) sources of information that I am, you may already know that the phenomena of the Death Valley Sailing Stones has been scientifically explained in the current issue of the journal, Plos One. If you are not connected to such sources, however, you may not even know what all the fuss is about.

Let’s start there … with what was known about the stones before a crack team of scientists, armed with the latest technology, figured out was going on. “Racetrack-Playa-Death-Valley-2” by Daniel Mayer – Originally from en.wikipedia; description page is (was) here
first upload in en wikipedia on 04:23, 28 October 2002 by Maveric149. Licensed under CC BY-SA 3.0 via Wikimedia Commons.

THE HISTORY OF THE SAILING STONES:

In 1915, a prospector named Joseph Crook is reported to have discovered a remote, flat area in Death Valley where stones appeared to have left trails in the desert as they traveled across the barren ground. The mechanism of the stone movement was a mystery.

WHY THIS IS WEIRD:

The area Crook discovered is a playa, which is a dry lake-bed. It is a little less than than three miles long and a little more than a mile wide. The playa is extremely flat, with its southern edge being about one and a half inches lower than the northern. Interestingly, the stones often seem to move up the incline, from south to north. The trails inscribed by the wandering stones “are often tens to hundreds of feet long, about 3 to 12 inches wide, and typically much less than an inch deep.” (Wikipedia) Many of the trails are long and straight, but some curve, zig-zag or double back on themselves. These trails are not etched in dust or sand, but in hard-baked clay. One can walk out to the stones to examine the engraved trails and not leave a mark on the ground. Though no one (until 2013) had observed the active movement of a stone, periodic checks on the locations of  individual rocks revealed that the they were moving and leaving new trails.

The stones have been “sailing” – without apparent interference from humans or animals – for at least a century. I’ve listed several notable scientific investigations that have been conducted at the playa below, but one specific study was of particular interest:

HOW FAR DO THEY SAIL?

In a study that began in 1972, the location of thirty stones, (with what appeared to be fresh trails,) were marked. Each stone was given a name. Over the next seven years, changes in the stones’ locations were recorded.

Ten of the stones moved in the first winter. One, named Mary Ann, moved 212 feet. In two of the next six winters, multiple stones moved. By the end of the seven-year study, 28 of the named stones had moved. The smallest stone to move had a diameter of 2.5 inches; the largest was 80 pounds.

One stone – estimated to be over 700 pounds – was named Karen, and it did not move during the monitoring period. It was believed that its original trail, which was 570 feet long and very straight, may have been drawn when it originally tumbled onto the playa.

After the study was complete, however, Karen seemed to disappear from the playa. It was rediscovered in 1996 by a geologist who located it about a half mile from its 1972 position.

Over the years, multiple theories had been advanced to explain this phenomena. Modern, conventional, scientists has always believed that some combination of water, ice and wind were responsible. It is likely that the inaccessibility of the area during winter months prevented the first people who studied the rocks to think along such lines. The earliest scientific theory was that there was a magnetic anomaly in the area, but this was proved to be unlikely when the rocks themselves were revealed to be entirely non-magnetic.

The playa’s relative proximity to Area 51 led some theorists to the conclusion that the phenomena must be connected to alien activity. My absolute favorite theory in this category is detailed in a blog called, Villains & Vaudevillians. I’ve provided the link to the full article below, but here’s a snippet from it:

Are the sailing stones pieces of a spacecraft that met its untimely demise during prehistoric times? Was the object that the crashed in Roswell, New Mexico really an extraterrestrial salvage vehicle sent on another mission to located the long vanished spacecraft, only to succumb to the same fate. Is the wreckage at Area 51 giving off a beacon in the form of a magnetic field to call its lost brother home?

It really is a must-read, if you have a few minutes to spare.

THE MYSTERY OF THE SAILING STONES, SOLVED:

It turns out that the modern scientists were right — this is a phenomena caused by water, ice and wind.

The following set of photographs was published in a paper entitled Sliding Rocks on Racetrack Playa, Death Valley National Park: First Observation of Rocks in Motion, in the journal PLOS One.

“Image acquired with a handheld digital camera on January 9, 2014.”

Take a look at the stone indicated by the red arrow and compare its position as it changes – in less than 30 seconds – in relation to the two (non-moving) stones indicated by the blue arrows.

This was not the only movement observed by this team.

Here are a couple of excerpts from the paper which explain quite well how the stones sail:

A necessary condition for the rock motion we observed is the existence of a playa pool deep enough to submerge the southern section of the playa, yet shallow enough to leave many rocks partly exposed at the pond surface. Other repeating features of rock movement events that we observed include the presence of floating ice, temperatures and sunlight sufficient to create melt pools in the ice, and light breezes that are steady enough to drive floating ice. Although the ice breaks up around rocks, even thin moving ice sheets can generate sufficient force to drive rocks across the pool. All observed rock movement events occurred near mid-day when sufficient ice melting had occurred to allow ice break-up. Creation of rock trails is difficult to observe because trails form below the ice-covered pool surface where they are often not evident until the ice has melted, and liquid water has been removed. In addition, rock movement is slow and relatively brief—our GPS instrumented stones traveled at speeds of 2–5 m/minute for up to 16 minutes—so casual observation is likely to miss rocks in motion. Weather station data show that the freezing temperatures necessary for ice formation, and winds in excess of 3–5 m/s are common phenomena at Racetrack Playa during the coldest few weeks of winter. Therefore, the extremely episodic occurrence of rock motion (years to decades) is likely due to the infrequency of rain or snow events sufficient to form winter ponds.

“The playa is in the small Racetrack Valley between the Cottonwood Mountains on the east and Nelson Range to the west. During periods of heavy rain, water washes down from the Racetrack mountain area draining into the playa, forming a shallow, short-lived, closed-system lake. Under the hot desert sun, the thin veneer of water quickly evaporates leaving behind a surface layer of soft slick mud. As the mud dries, it shrinks and cracks into a mosaic pattern of interlocking polygons.”

Climate & meteorology of the area:

The Sailing Stones of Death Valley in the Media:

Note: That second book is actually scheduled to be released on Sept. 16th, 2014. I wonder what they are going to do about the chapter on the Sailing Stones.

1) Atlas Obscura – THE SAILING STONES OF RACETRACK PLAYA
–Lots of great photographs of the stones and their trails.

2) Jon Sullivan’s commentary from a trip to Death Valley on 08/23/2003
–I have no prior knowledge of Mr. Sullivan, but in my research, I found his first-person account of a visit to the playa interesting.

3) The Mystery of Death Valley’s ‘Sailing’ Stones from The Weather Channel
–31 excellent photographs and some outdated information about two former theories.

5) Weird History: What are the Sailing Stones By CURTISRX
–the source of the re-assembling, pre-historic, spacecraft theory I mention above.

Weird or What? (embedded below.)

The following video is one  episode of a series called Weird or What?, which airs on SyFy and is hosted by William Shatner. This episode is currently available for viewing online, courtesy of the YouTube channel, Documentary Hub.

The Sailing Stones are covered in the first segment of this episode, which runs for approximately 15:38 minutes.

(Video availability on the internet comes and goes, so if the above viewer doesn’t work, try searching for “Weird or What sailing stones.” Because this has been internationally broadcast, the season and episode numbers are conflicting, depending on which version of the show turns up in the search engine.)

Note: right now the search engines are flooded with the news that this mystery has been solved. If anyone knows of a documentary made BEFORE the announcement, please leave a comment so I can track it down. 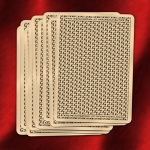 This is an early entry in my PDOC series. I’m working on creating the deck’s homepage. If  the image above doesn’t yet link to a new page, it soon will.