I suspect I’ve been manipulated into having a crush on Tom Hiddleston. I suppose it’s possible no one is pulling my strings. We’ve all had the experience of noticing a new thing for the first time, and then – suddenly – it’s everywhere; it’s the natural consequence of paying attention. Still, I can’t help but wonder if this particular actor has been packaged especially for my consumption.

(And I’m not a fangirl to many … Cary Grant, Joan Crawford, Jimmy Stewart, Sandra Bullock, Danny Kaye, Meryl Streep, Patrick Stewart, Robert Downey Jr., Jennifer Lawrence, Jessica Lang, Kathleen Turner … Ok. I guess I am a fangirl at heart, but that’s a pretty stellar list, IMHO. It took Jennifer Lawrence’s performance in Silver Linings Playbook (2012) – after an amazing turn in Winter’s Bone (2010) – to exalt her into my pantheon of greats. Honestly, I’m not sure I’ve seen enough from Hiddleston to say he’s IN the list. But he is in contention for it.)

Here’s how the seduction began:

It started, a couple of months ago, when I saw this come through one of my feeds: 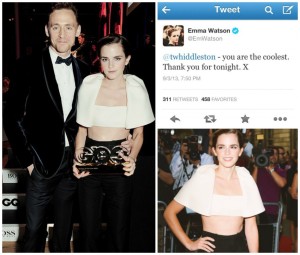 The implication, of course, was that some sharp-eyed fan had noticed Hiddleston’s gentlemanly nature, and shared. Subsequently, the post had gone viral, and was thus in my feed. (Now I’m wondering if it was just planted by a good public relations expert.)

Regardless of how or why it came to my attention, I was intrigued. I thought, perhaps, this Hiddleston-person was a celebrity journalist, or a writer, or something. (I mean, doesn’t he look more like a writer than a movie star?)

I googled ‘Tom Hiddleston” and was directed to IMDb.

Ah. The latest actor from the latest superhero flick. That explained his appearance. I had, indeed, enjoyed his performance in The Avengers (2012), but I figured I wouldn’t be seeing much more of him until the next sequel came out.

Then I scanned his filmography and discovered he’d also been in another two of the good movies I’d seen recently … and he’d made them better.

with Steven Spielberg & Benedict Cumberbatch in 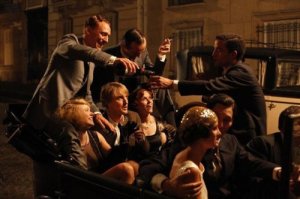 as F. Scott Fitzgerald in

I was impressed because I had no idea that this one actor had been in three movies I’d enjoyed within the year. To me, that indicates he’s playing characters with skill, rather than playing himself. (Think of Nick Cage, or Johnny Depp – it’s hard to get past the actor to see the role. In most cases. But I still love Johnny Depp.) I mentally filed away Hiddleston’s name and face in the category of someone to keep an eye on.

Doing so has not been difficult.

First, I ran into this clip of him at Comic-Con:

(Tip: It’s the shushing that appeals.)

Then I came across this:

(Tip: A man who wears a great suit and dances with no regard for his dignity is hard to resist.)

Just today he popped up doing this:

But that’s all Hiddleston being Hiddleston. He’s cute, and appealing as a person, but I am ready to see him work again. And now my wish is being granted:

Here’s an interview I found about the film:

While I wait for Only Lovers Left Alive to open, I’ll be checking out The Deep Blue Sea (2011), which is available via Netflix streaming right now.

Mostly because – as I was gathering links for this post – I came across this gorgeous review from the blog Feminéma. However, other reviews warn me that this film is very slow and very European. I’m willing to give it a shot. After all, Tom Hiddleston is in it.