In the vein of yesterday’s odds-n-ends post, I’ve found some tidbits and scraps to share. Weirdly (conveniently) they all have to do with traveling the roads of Minnesota.

Back in August, I hopped into the car with a friend, the lovely Caroline Burau, author of Life in the Hotseat: Answering 911 and Sugarfiend. I was actually combining two trips into one – Caroline wanted company as she sought out a childhood memory, and I was expected at my family’s girls’-weekend at the cabin.

On the way from St. Paul to Mille Lacs Lake, Caroline and I chatted, discussed and otherwise became embroiled in catching up with each other. Then – from the corner of my eye – I saw bigfoot lurking at the edge of the woods.

It is a testament to the patience of my friend that she turned the car around.

Imagine her relief when I was able to point out this:

Of course we were both dressed in shorts and sandals, but we tramped through the field anyway so we could get a better look. I tore my ankle wide open on a tree stump. (‘Tried to snap a picture of the injury, but I missed. YOU try to photograph the back of your ankle with a cell phone.)

Bleeding staunched, we continued toward our destination.

Still, it’s big enough to freak me out. From certain vantage points, you cannot see the opposite shore at all. And 42 feet seems deep enough to host at least a small lake monster … which kind of turns this lake cam into a monster-watch cam, doesn’t it?

By the way, this is the same lake that made national news in spring of 2013. A rare phenomenon called an Ice Tsunami or Ice Shove was recorded by a woman who emphatically states she grants “no use (of her video) without permission”. (Even though she has not disabled the embed code. Hmm.) Anyway. You can see the video here. (I presume it’s okay to share the link.) Please enjoy the raw Minnesota-ness of the video, and remember we don’t all sound like that.

No. Really. You should watch at least a little of the video – it’s bizarre and awesome all at once. Mute if necessary.

PS: There will be no pictures of anything that took place at official girls’ weekend.  What happens at the cabin, stays at the cabin.

(I’m pretty sure I shouldn’t even mention the Cha Cha Slide.)

On September 1st, Ogre and I needed a get-away, so we headed for the Fire Museum in Hinkley, MN. On the way up, we stopped at a Lion’s park in one town and A&W in another. Because I am a child. 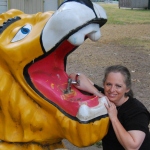 Remember when these used to work?

Once I’d been sufficiently stuffed with pizza burgers, we moved along, taking the back roads, of course. On one otherwise quiet stretch, we passed this:

It just emanated menace and secrecy. The fatigue-clad driver and his cohort were young and stony-faced, with their eyes hidden behind mirrored aviators.

Do you have any idea what this kind of vehicle is used for?

In Hinkley, we were surprised to find that we’d coincidentally chosen to make our visit to the museum on the 119th anniversary of the fire itself.

On October 4th, I’ll share a video project made from information gathered that day at the museum. It will be the inaugural entry in an experimental new blog feature – The Friday Night Picture Show.

Just this last weekend, we drove to a wedding on Saturday and a Renaissance Festival on Sunday. Somehow we managed to keep in good spirits through the events, even though traffic in both cases was a bloody nightmare.

Going to the wedding should have been a half-hour drive. Ogre and I left the house at 3:00p, planning to mill about with other guests before the 4:00p ceremony.

We arrived at the country club in time to see a distant white speck on the other side of the expansive grounds, marching down what appeared to be a grassy aisle. We opted not to wait for the next shuttle cart. I kicked off my heels and we trotted over.

Luckily, it’s summer, so I wasn’t wearing stockings. Also luckily, it was the correct bride. (We found out later that there were at least three other weddings going on – all in opposite directions. Did you know that pretty much all brides look alike from a distance?)

After the stress and joy of the wedding, we expected to be very calm about going to the Ren Fest the next day.

In the morning we had a nice pancake breakfast for five. (Ogre, The Dog, The Boy, The Boy’s Buddy, and me.)  We left the apartment with the expectation of an hour’s drive ahead. We knew it would be snug in the little commuter car that Ogre drives – what with a 70+ pound dog AND two 6′ young men in the itty-bitty back seat, but we’re a close family.

I had ample time to photograph it.

In another 10 minutes, we were parked next to a similar sign (which I didn’t photograph, sadly.) It said,

The time was 1:42p when our front fender crossed into the same plane as that sign.

We got through the festival gate a little after 3p. Miraculously we were all still alive and smiling.

I told you we’re a close family.