← When the real world goes too dark, sometimes it’s our job to bring back a bit of light.
NaNoWriMo – one day left. →

A ghostly event in room 566 at the new hotel.

I found the haunted room here at the new hotel!!!

Yes, there were three exclamation points. You’d think I would have immediately come here to the blog to share the story, but I was otherwise monopolized. At the time, I was deeply embroiled in my quest to complete 50,000 words for NaNoWriMo. When that was done, I was ensnared by my life – or rather the lives of my menfolk. I’ve been helping my husband get pysched up for starting his new job (which he begins tomorrow – praise all the saints) and helping my son get calmed down for his first *college-level finals (and his first real date – oh-my-God, how old am I?)

* Remember, he’s only just turned 17, I’ve still got some mothering to do.

For the last two days, I’ve been concentrating on preparing myself for the next phase of this new life we’re creating. I’ve organized & disciplined the HELL out of my calendar and my planner.  (When I listen carefully, I can hear them still whimpering faintly.) I’ve set new goals and recommitted to old ones. I’ve tidied up some of the pages around the blog.

I’m feeling organized, confident and hopeful. I know what I need to do next, and what I need to do after that. Soon I’m going to go get cozy, on this wintry night, with a horror movie. (We’re having the first snow storm of the season here in Minnesota.) There’s a little time now, though, to tell you my mini-ghost story.

In room 566:
Deep in the night, on a mid-week shift at the new hotel, I realized a particular room  – which had never before been available – was marked as rent-able. I had noted it on the list before, because it is labeled as a king suite. As far as I knew at the time, the hotel did not have any suites. When I had asked about it, I was told that I didn’t have to worry about it because a long term guest was in residence there.

Curious now that it was unoccupied, I set the back-in-five-minutes sign on the counter and went to have a look. I took the elevator to the top floor, then walked about half-way along the hall until I came to the correct door. I knocked – like I always do – waited, then let myself into the room. I located a single switch to my left, and flipped it on. A dim light from one wall-mounted lamp oozed out to fill the room, but it was weak, and it left soft shadows in the corners. Directly in front of me there was a living area furnished with a slightly shabby sofa, two matching side chairs, a scarred coffee table and a large television encased in an open armoire that stood against the right hand wall. In the middle of the big room, a writing desk pressed up to the back of the sofa. Beyond that, against the far left wall, a low king sized bed crouched between two night stands.

I stepped into the space and let the door shut behind me. To my left there was a small kitchenette, separated from the rest of the room by a wall of its own and narrow breakfast bar. I ran my fingers along the bar top as I crossed toward the desk. I was wondering where the bathroom was, and if it was any larger or grander than those in our regular rooms. I stood next to the desk’s bench for a moment, until I figured out that the bathroom was next to the kitchenette, and that it didn’t look like it could be very spacious.

It was then, when I was standing in the middle of the room, facing the bed, that the television behind me came to life.

I spun around, thinking someone had followed me into the the room and turned it on. There was no one near the television, except for the white-haired news anchor displayed on the screen. For a few seconds, I stood frozen, then I turned in a slow circle, scanning the room for any possible spot that could conceal a person. (I have a fear of letting myself into an occupied room. It’s been haunting me ever since the unexpected occupant in room 217 spooked me badly.) Finally, I thought to check the bathroom. It, too, was empty. Even though, by then, I was convinced that I was truly alone in the suite, I looked for the room’s remote control. It was resting on one of the night stands.

One part of my mind was scrambling for a rational explanation, but  it was having some trouble because another part was busy screaming, “Appliances that turn themselves on and off are classic signs of a haunting!”

At last my rational brain deduced a plausible answer: the television had to be plugged into a socket that was powered by the switch I had flipped upon entering the room. Without realizing it, I’d provided power to a television that had been left on.  There had been a delay simply because some TVs take a little time to warm up. (Later, of course, I realized that some TVs from the 70’s required warm-up time, but I wasn’t thinking about how old or new the set was in that moment.)

Since I had figured out the probable explanation, one thing remained to do: I went back and turned off the only switch I had touched since entering the room.
The room instantly went dark … except for the flickering, bluish light the television continued to pour out. I had to cross the suite to fetch the remote in order to kill it. 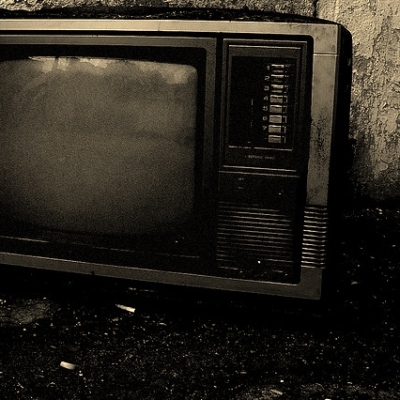 So what do you think? Faulty wiring maybe? Or some kind of reverse sleep timer?

Or just the way things are at: 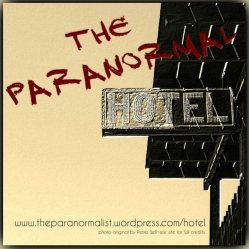 Click here for more stories of
The Paranormal Hotel

photo credit: Dfardin Licensed CC BY-NC 2.0 (Attribution-NonCommercial 2.0 Generic)
It has been cropped to square.
NOTE: This post may have been re-titled and edited from its original form,
for inclusion on The Paranormal Hotel homepage.