A few days ago, a friend, Kris, came to White Bear Lake to spend the day with me. I showed her the independent bookstore, the bakery, my favorite upscale patio bar / restaurant, and a shop with distinctive clothes on one side and high-end home decor on the other.

Once we’d hit the high points in the town proper, I drove her along the lakefront to Matoska Park, where the two-story gazebo lives, and where a bridge crosses a narrow channel then leads to Manitou Island. The island used to be a boys’ camp in the late 1800s when WBL was a big resort town. Now it’s a private neighborhood for the wealthiest of WBL’s citizens. We parked in the lot meant for SUVs with boat trailers, and strolled toward the bridge. At the first Residents Only sign we paused, looked at each other then continued on. We made it all the way across the bridge, and a few yards onto the island itself before we came to another sign that warned us of security patrols, and reminded us that we were not welcome.

I laughed and told her I had another place to show her. We went back to the car, then on to a dive bar on the edge of town. Dick’s Little Bar has an honest-to-goodness backyard, complete with picnic tables and a horseshoe pit. Once, when I took my mom there for a lunch, the waitress gave my dog three strips of bacon as a treat for being cute.

At Dick’s, you can get an a-mazing, greasy hamburger, on a butter-toasted bun, with chopped fried onions … a burger just like the ones that Kris and I used to flip – twenty-five years ago – at a little place in Anoka, called Patty’s Pub. 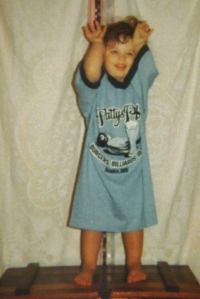 Kris and sat at a picnic table, sipped beer, and reminisced about being 20 for a while. Then the conversation turned to the present.

Later, at home, I started thinking about another Island, one that doesn’t have an official name, and isn’t even a proper island.

In this photograph – taken this spring – it appears easily accessible … but 2012 has been a dry year. When I was a teenager the river ran high in Anoka. The Rum rushed through that channel, and the tips of those stepping-stones were slippery with algae. That didn’t stop me from going there hundreds of times. From the time I was 15, I liked to sit on the upper level of the “castle” and write in my journal during the day. At night, filled with teenagery angst and a spooky sensibilty, I liked it even better.

In the dark – sometimes with friends, but often alone – I would scramble down the steep bank toward the castle, across the rocks and out to the island. (At the time I didn’t think of myself as serial killer bait.) Every once in a while, the police car that patrolled the lot above the river would stop, and a cop would shine a light toward the island. By the time his flashlight beam played over the castle, I was always hidden in its shadowy belly.

Back then, I was fearless.

When did I get so old, I wondered. Why hadn’t Kris and I boldly cross over the bridge to explore Manitou Island that afternoon? After all, we are just two respectable 40-something women, out for a stroll on a lovely autumn afternoon. What cop, or security guard, would do more than remind us the island is private and suggest we leave?

That’s when it dawned on me. I’m not afraid of the actual potential consequences of ignoring those Resident Only signs. Not as an adult, anyway. The thing that stops me every time is my almost subconscious belief that I don’t look harmless, or respectable, or 40+. Deep in my head and my heart, I feel like the teenage girl that used to hang out on castle island – the girl who would have been hauled down to the station so that the authorities could call her parents … had she ever been caught.