Something wicked this way comes (in six weeks.)

The Halloween countdown continues, but first, the answer to last week’s puzzle: 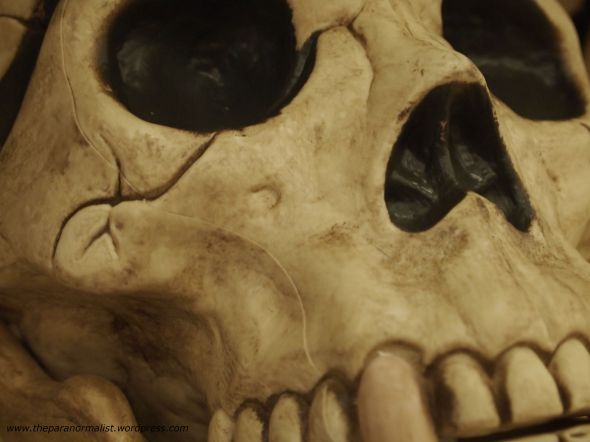 As for this week? One of these things is not like the other … 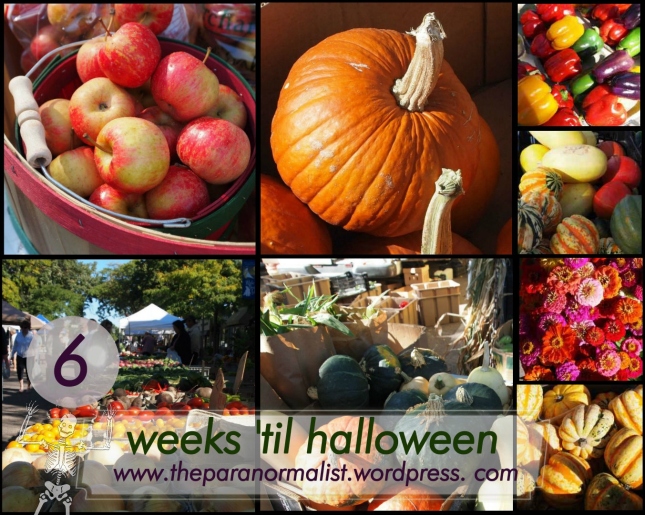 NOTE: Feel free to use my collages for your own Halloween countdown. You can navigate to the the complete set by using the search-by-category tool on my main page. (Look under ‘Halloween’ then ‘Countdown’. I’d appreciate a link from the image to my main page, but it is not required.)

Best ghost story since The Others: The Orphanage.

I’m about to go play some Endless Ocean, for the first time in at least a year, because I actually have three days off work, before I start my new work schedule, now that my training at the new hotel is complete, but I wanted to pop in to recommend this movie. (Pant, pant.)

Okay. Maybe I should slow down and back up a bit. (Though, now that I think about it, that pretty much covers the latest developments in my life.)

I admit, I’m a little frenzied right now, in a strange sort of way. I don’t seem to really know what to do with this unexpected mini-vacation. So far today I’ve watched a movie and caught up on my blog reading (again.) I expect to do a bunch of writing tomorrow and Friday. I’ve considered doing the deep cleaning that this apartment really needs (mostly hours of vacuuming, I fear) just so that I can start putting up my Halloween decorations. I want to cook, bake, read, luxuriate in hot baths, help my son study for his first college-level tests … oh, I want to do lots of things. As for the pending video game session? It’s just a way to convince myself that I can afford to waste a little time on something completely frivolous. 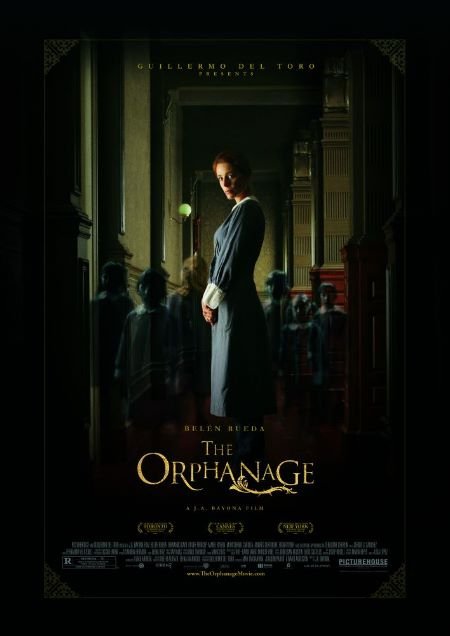 Before I do that, though, I have to rave about The Orphanage. (I don’t really do movie reviews in the classic sense. For a plot summary, etc. see the information at IMBD.) The Orphanage was produced by Guillermo del Toro, who directed Pan’s Labyrinth, (which was beautiful, but too sad for me.) The Orphanage is the horror movie I was hoping for (but didn’t fully experience) when I went to see The Woman in White. It’s subtle, creepy, atmospheric, and logical … it even has a satisfying ending.

The film is in Spanish, so I was dependent on the subtitles – which was a shame, because I suspect I missed some of the depth and richness in the lush cinematography. (I’ll be watching it again soon, so that I can pay more attention to the visuals.) Otherwise, I was pleased with the differences I noticed between it and the recent American horror films I’ve seen.

Immediately, I was struck by the very human loveliness of the lead actress, Belén Rueda. At one point in the movie she is asked how old she is. Her reply is 37. Amazingly, in the scene, she actually looks 37. Even more startling is the fact that she is allowed to grow almost haggard as the film progresses. I don’t mean that she starts to look sweaty, or that her clothes tatter, or that she looks mussed – I mean she looks like a woman who is spiraling into desperation. It was a refreshing change from the air-brushed perfection of most American actresses, especially in the horror genre, where everyone is either ancient and hideous, or 18. 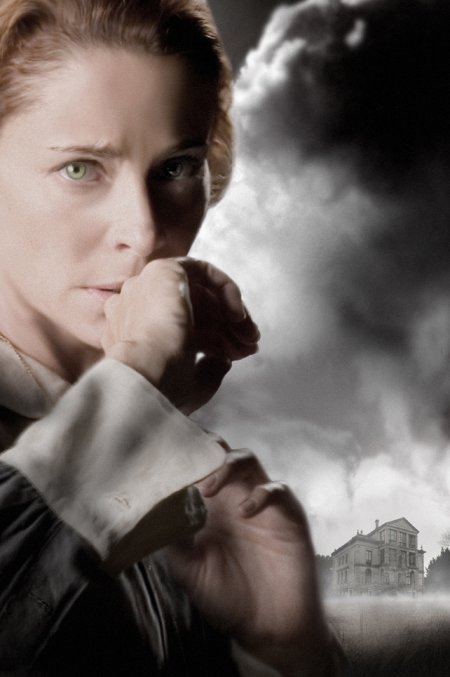 Okay. She does look a little air-brushed here, but if you watch the movie, you’ll see what I mean.

This movie does not rely on special effects. There is some good makeup work, but it is not front and center. There is no gore. What we get, instead, is suspense and story. It feels like a real movie, which happens to be scary. This a great film to coax you into the spirit of the Halloween season.

I think we may have a ghost at the hotel. (Possibly more than one, but the story of room 217 is for another post.) If we do, it is a non-confrontational spirit – one that just flickers at the edge of my awareness, late at night. There have been no full-bodied apparitions, no objects mysteriously moved. Sometimes, though, when I am bent over paperwork, I peripherally see a dark shape walk past the corner of the desk, toward the main entrance. Sometimes, when I am washing my hands in the employee restroom, I get the feeling that someone is in the laundry room beyond the bathroom door – perhaps near the triple sink across the room, perhaps around the corner of the washing machine, near the fridge. My sense is that the presence is male, and my logic tells me that he would likely be the revenant of a suicide that happened, before my time, in room 107. 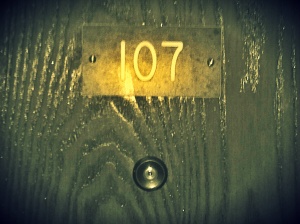 When I first started working at the hotel, my coworkers were eager to share stories of all the scary things that had happened there during their employment. I was told of medical emergencies, drug overdoses and domestic disputes. (One involving a gun.) Don’t get me wrong. I work at a nice, mid-range, chain hotel, in a fourth-ring suburb. Most of the guests are business people in town for a meeting, or families on their way to vacation destinations up north. Some people, however, go to hotels for much darker reasons, and one of those reasons is to die quietly, leaving no muss for loved ones at home to discover. I would be surprised to find a hotel (more than a couple of years old) that had never sheltered a successful suicide.

My understanding of the story of ‘our’ suicide is incomplete. Different employees seem to have different versions in their heads, and none of them seems able or willing to come out and tell everything that happened. (My suspicion is that the clerk on duty that night no longer works at the hotel.) I’ve heard there was a lot of blood for the housekeepers to deal with, but I’ve also heard that it was a simple overdose. I believe the victim was male, but I have no idea how old he was, or if he acted differently from any other guest checking into the hotel. The one thing everyone agrees on is that it happened in room 107.

If the door to room 107 were just one or two strides nearer, it would be visible from the front desk. That thought bothers me. Had he lost his nerve, it would have only taken a few steps, or a loud shout, to summon help.

At the first opportunity, of course, I visited the room. It was late. The hotel was near-empty. I carried the house phone with me so I could answer any calls, but I didn’t expect it to ring. Because it is a smoking room, I also took my cigarettes and an ashtray along. It’s an ordinary room. There is one queen bed wearing a shiny floral bedspread, flanked by two nightstands. At the bed’s foot, a sturdy dresser holds a lamp and a small television. In the corner, near the window, there is a round table. Pulled up near the table is an armchair, upholstered in tan vinyl.

The vinyl was clammy when I sat down. I kicked off my shoes, brought my legs up under myself, and lit a cigarette. No pictures adorned the walls. The red digits of the alarm clock blinked 12:00. A small black beetle crawled across the snowy-white pillow on the left half of the bed. Other than that, nothing moved. Nothing happened. Except, well, except that I became progressively sadder as I smoked and waited and watched.  When my cigarette burned down to the filter, I stubbed it out and stood. The carpet felt damp to my feet, so I hurried to slip back into my sandals. I didn’t switch off the lights until I could do it from the safety of the bright hallway.

I’m not convinced that what I felt in room 107 was in any way paranormal. Being alone in such an inexpensive, nondescript hotel room is simply depressing. On top of that, this particular room has a distinct and special air of abandonment, because the other clerks avoid renting it out until they have to. (Though one told me she deliberately gives it to guests who irritate her when they come in.) I think the housekeeping staff hurries to clean it and get out when it has been rented. The bedspread is often askew and they frequently forget to stock it properly.

It wasn’t until after my visit to room 107 that I began to notice the sense of a presence in the laundry room, and the shadow that seemed to move past the desk. The paranormal investigator in me jumps to the obvious conclusion – that a lonely, unhappy spirit latched onto a naive hotel clerk, freeing itself to roam beyond its former prison – but I don’t really believe that. I realize that the human imagination is vulnerable to the kind of atmosphere that exists in a sprawling hotel in the middle of the night. I realize that I’m sleep-deprived much of the time, and that it’s not surprising that I occasionally think I see something move from the corner of my eye.

Here’s where things get tricky for me. It is in my nature to make up the details for sketchy but intriguing stories I come across. In this case, I’ve put all the pieces together and come to this:

The hotel where I work is haunted by the ghost of a young male suicide. He cut his wrists or took an overdose of tranquilizers. Either way, he did it in the bathtub, with the warm water running. Toward the very end of his life, he changed his mind. He called out. Because he was close to the front desk, he should have been heard, but the clerk on duty was doing laundry (or in the bathroom) and didn’t hear a thing. The young man wished he could take it back, just leave the hotel and start over. Then he died. He was found because the water eventually overflowed and soaked the carpet, of course. (Which is why it feels damp now, even when it really isn’t.) Some nights, his spirit goes looking for the clerk who didn’t hear him. (Which is why I sense him in the laundry room.) Some nights he imagines himself leaving the hotel before it’s too late. (Which is why I see him heading toward the main entrance, but never getting there.)

See how tidy it all becomes? This is how ghost stories are made. Now that I can see the progression so clearly, I should come to the conclusion that there is no such thing as a real haunting, don’t you think? But I don’t. Instead I wonder exactly what I have experienced. More accurately, I second guess my experiences. In an effort to sort things out, sometimes I write about what I think I experience, which – given time – solidifies the story I’ve crafted even more.

Am I talking myself into – or out of – believing in paranormal phenomena?