I have less than an hour to get something down today. I feel compelled to write something “really good” which isn’t helping. I could have started writing an hour ago, but I’ve been reading everyone else’s posts instead of coming up with something to say. I suppose it’s best to just let that go, and finish this the way it wants to be finished.

I should be pretty tickled with how well this has gone. It was nice that launching my blog coincided with the challenge. NaBloPoMo provided just enough pressure to get me to really dive into the blogosphere and figure things outs. I am pleased I managed to do ANYTHING for 30 days straight. (Consistency is not my strong suit.) I’ve made new friends. Overall, it’s been a good experience, even when it was tough to force myself to deal with the commitment.

Despite all those positives, I’m feeling a little sad and lost. What happens tomorrow?

I know only two things for sure:

1) On my 101 in 1001 list, item # 48 says: successfully complete NaBloPoMo once each season. Next year, I’ll do the autumn run in October – which should be pretty darn easy, considering my theme.

2) I’m hoping to participate in National Novel Progress Month for December, and beyond. Even if the group doesn’t tackle the task again, I will absolutely set a goal for myself and track my progress.

Oh. I know one more thing:

BONUS THOUGHT) I will be writing – something, somewhere – tomorrow. Because that’s what I do.

A hypomanic horror writer / paranormalist can get a little too jumpy.

I took my dog out for his last walk of the night just now, but I was feeling lazy. I snapped him to a long-line (40+ feet) and let him wander off into the darkness. I stood in the middle of the extraordinarily quiet yard, gazing up at the stars.

At first, he calmly took care of business. Then he found a stick that he could toss for himself. I knew this, not because I could see him in the pitch black beyond the cozy glow cast by the porch light, but because I could hear him romping in the lawn’s thick layer of dry leaves. When he crossed from the mowed yard into the meadow, all the crunching and crackling ceased. The night’s silence was broken only by the sighs of the tall, soft meadow grass as he swished through it. After a while, he started tugging a bit too much, indicating to me that he was actively running back and forth.

Not wanting him to get tangled around any of the many trees and posts in our yard, I positioned myself so that his line ran straight and taut from where I stood to where he played. Then I called his name. By the sound of it, he responded by coming out of the tall grass fast, crushing leaves and snapping twigs as he bounded toward me. In a few strides, I could see him, running flat out and low slung, like some sort of Savannah predator. I was about to brace for impact when I heard something else crashing through the leaves beyond him. It sounded like it was a few yards behind, but it was drawing closer. I strained into the gloom, trying to see what creature could possibly be fast enough to gain on my athletic boxer-cross. Whatever it was had to be small, because I could see nothing.

One of the feral cats? No. They run away. A fox? Only if it’s rabid – it would have to be crazy to chase my powerfully built dog. Something … else?

My heartbeat sped up. I urged my dog to come faster. I turned to run toward the house. Then my very-good-dog leapt into the space next to me, happy that I was obviously going to play with him. His panting and prancing was the only sound I could hear. The pursuing creature had stopped … in fact, had disappeared.

It was a few heartbeats later that I realized what I had heard. The long-line was lying in a narrow curve that stretched from hand, out toward the meadow, then back to my dog’s collar. This curve had been dragging through the leaves behind him as he ran.

Maybe I should cut back on the horror movies a little.

This is my boy when he was only 17 weeks old. 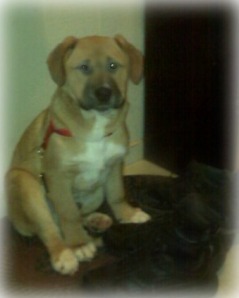 P.S. In case anyone is wondering about this hypomania I keep mentioning, this a good description.

Recently, two stories of night visitations have been related here at The Paranormalist. (My own and that of my great niece.) Tonight, lets talk about a different kind of visitation.

I wrote about my great-grandmother and my grandmother, Marie, in the post The Paranormalist’s Family Album: Jack, Marie & Edward, with guns – 1910s. Marie’s story – unlike her mother’s – is well known to our family. She was sent from Norway to American, with her brother Jack, because her mother was dying, to live with siblings from her mother’s previous marriage.

The first half-sister who took in the children was not kind. There are stories of Marie being stripped of the nice things she had with her when she arrived in Minnesota, and of being forced to sell a certain number of apples before she could return home for the evening.

Time passed. Stories of the children’s mistreatment made their way to northern Minnesota, where Edward and another adult half-sister lived. This half-sister went to fetch Jack and Marie while they were still young teens. A few good years followed. Marie learned the womanly arts, like sewing and cooking. She went to the local barn dances. She fell in love with a German boy, John, who had a wild reputation (for his time.) She married him and moved to his homestead. Then things went horribly wrong.

By most accounts, the abuse was harsh and frequent. The marriage yielded three children. Marie’s only son took the brunt of John’s legendary temper, but the girls did not escape unscathed. (One afternoon John speared my mother through the thigh with a pitchfork, because she wasn’t packing the hay wagon tightly enough. She wasn’t yet twelve years old at the time.) Though Marie adored her children, she was not able to protect them. Sometimes she was able to deflect John’s rage from them to herself.

One by one, the children ran away. Eventually, the couple sold the farm and moved to a small house in town. Marie became a licensed practical nurse. She worked with The Sisters, as she liked to say. She settled into a rough peace with an aging John.

Very late in her life, Marie divorced John and came to live with my mother and me. She was in her eighties, I was in my late teens. She didn’t take up much room. She just needed a place to keep a few few delicate things – her nursing pin, her sewing basket, her china cup – she had brought with her, from the little house she had shared with John. It was easy to make her happy. She enjoyed a very small scoop of vanilla ice cream, in a pretty dish, at the end of each day. She died of heart failure before I was graduated from high school.

Just a year later, I became pregnant. When my daughter was born I became a single mother. My family remodeled the basement of my mother’s home into a nice little apartment. My daughter and I lived there for four years.

By the time my girl was a year and a half old, she was frequently talking about her friend, “Tee-tee”. Tee-tee liked to have tea parties. Tee-tee liked soft, pretty things. Tee-tee was very quiet. Before long, the imaginary friend faded from my daughter’s life, but every once in a while she would reminisce about spending time with the little woman, whom she now referred to as Grandma Teacup.

It wasn’t until years later that my daughter first saw a photograph of Marie as an elderly woman.

You already know the end of this story, don’t you?

I’m sorry I don’t have a way to upload a picture of Marie tonight, but I will when my scanner is working again.